“History Itself in a Bottle”: An Interview with Raj Bhakta 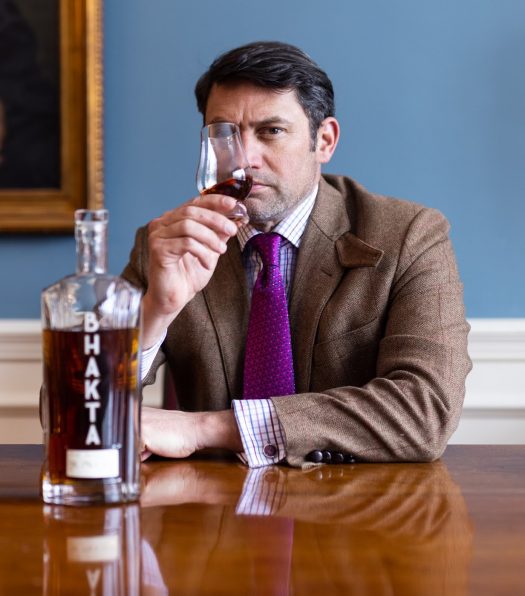 Perennial spirits entrepreneur Raj Bhakta has already cemented himself as one of America’s most ambitious booze salesmen. He founded WhistlePig and helped create an entirely new generation of whiskey drinkers, with a heavy focus on premium rye. His second foray into the premium category took a decidedly upmarket turn with Bhakta, a brand based around Armagnacs old enough to raise a room full of eyebrows. The Bhakta 50 blend features vintages dating from 1868 to 1970, meaning the youngest spirit in the bottle dates to the first Nixon administration. While we’ve found the liquid itself rich and complex, the age statements alone are enough to get a conversation started.

And that spark is exactly where Bhakta himself is focused. Beyond moving — or creating — markets for high-end hooch, it’s Bhakta’s penchant for storytelling that stands second-to-none in today’s spirits landscape. For Bhakta, sampling a particular decade’s vintage spirits is akin to reliving history from a previous point in life. (Or perhaps in Bhakta Armagnac’s case, reliving an ancestor’s history would be more appropriate.)

On the cusp of Bhakta’s 22nd barrel release — dubbed “Patton” in the company’s regular nod to historical figures — Raj Bhakta sat down with Drinkhacker in New York City to discuss a Ulyssean journey of discovery and bottling history itself.

Note: This interview has been lightly edited for readability.

Drinkhacker: With WhistlePig, you helped usher in a new generation of rye whiskey drinkers in America. This seems like stage number two. What do you think are the biggest challenges in convincing the American spirits audience to give Armagnac a try?

Raj Bhakta: I think the biggest challenge in getting people to drink Armagnac is actually physically getting the liquid to lips. People are drinking basically un-aged bourbon today, people are lining around the block. They’re lining around the block to buy four year old, mass-produced bourbon. And they think that they’re drinking something special. And to some extent it is maybe a little tiny, little, little bit special, like water, which comes in different varieties. But then you compare that to the opportunity in Armagnac where you have vintages galore. What blew me away, and I’m gonna take a step back and say, what was my journey into Armagnac. 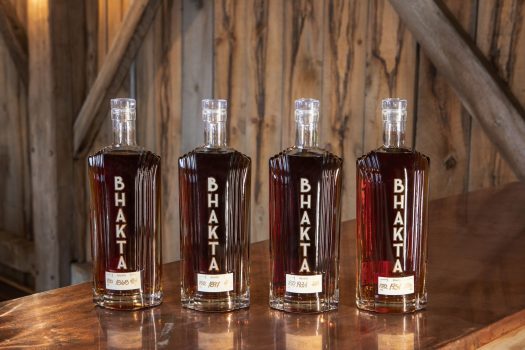 My wife was was pregnant with our fourth child. And she understandably enough wasn’t in the best mood. So she throws me out of the house. I get in the car and I drive across France. We were doing a sabbatical. She was pissed off because we were supposed to take six months off and just enjoy traveling, but she ended up getting pregnant, which was all my fault.

Drinkhacker: And you already have three kids.

Raj Bhakta: Right. So she’s angry at me, which turned out well, because I ended up driving over to the Armagnac region into a town called Condom. I go into this Chateau where the owner — these were really eccentric people — they had become obsessed with collecting the best vintages in Armagnac. But not just over a generation or two; since the late 19th century. And they put together almost every single vintage from 1868 to the present year. And to me, when you go in and you look at that, imagine walking into a cellar where instead of “These are our nine year old barrels,” here is history itself in a bottle year after year, going back into the 19th century. In 1868, the oldest, was from when Queen Victoria was in the middle of her reign, a guy named Napoleon III was Emperor of France.

You’ve got literally the whole history of the world over the past 150 years tied up in these vintages. So not only do you have history in a bottle, the miracle that these things made it through three German invasions, and that’s a miracle because an invading army, what do they first do? They go after the booze! 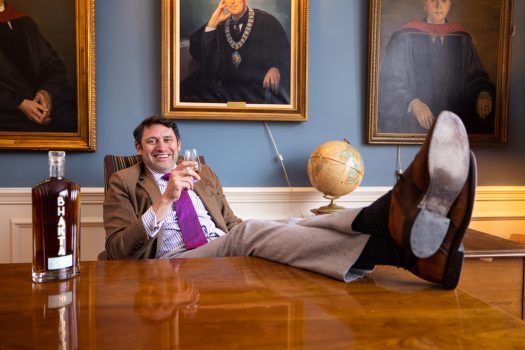 Now you’ve got it, made it through the wars, then it didn’t get sold, didn’t get drank. It didn’t get any of the things in between that have prevented every single other category of spirits from going into the history bin. And then you taste it. And you realize that there is nothing that any category of spirits, whether it’s taste, whether it’s craft, complexity, flavor, character, there’s nothing in any spirits category that Armagnac doesn’t have more of. So I’ll leave it at that.

Drinkhacker: How long was the process from chancing upon these vintages to releasing the first bottles?

Raj Bhakta: That’s a good question. It was probably middle of 2018. And I think it took about two years to get product on the shelf. I thought about what to name it. I had a number of cool names, like Hogsworth, and I would continue playing around with the pig theme. Pigs have always treated me well. But I decided I wanted to put my name on this one. It’s a long term play. And I’m a very strong believer that there are few people in the world, and I would even hazard to say that there’s nobody else in the world, who has traveled as extensively as I have looking at different types of spirits.

Drinkhacker: Beyond the initial Armagnac vintages you came across, have there been additional purchases as you look for subsequent releases under the brand?

Raj Bhakta: Yes, we’ve been making additional acquisitions. There was one very rich French family that had made an investment in a number of pre-20th century collections, which we acquired. For stocks that are a hundred year plus, globally, all spirits, Bhakta is a steward of more than 80 percent, I’d say.

Drinkhacker: Let’s talk about the Scotch cask finishing. Some might worry that the flavors could be dulled by smokiness, by peat. But obviously you had an idea, you did some testing, and it worked out. What was the development process for that?

Raj Bhakta: I wanted a bridge to the whiskey drinker. And a deep age statement product is normally Scotched. So I said, for the Scotch drinker, let’s create a product that blows away anything that they’re accustomed to from an age standpoint and give it a little kiss of smoke.

I ended up coming to this farm where a French farmer had lost the bet to this Scotsman. He sent him a full barrel of Armagnac because he lost the bet, and the Scotsman sent back an empty barrel of Bunnahabhain. The Frenchmen put the Armagnac into the Bunnahabhain barrel. That was like a “Eureka!” Type of moment, that giving it a kiss from the smoke creates the muscle memory of a whiskey drinker for a kind of smoke, especially a peated Scotch with way more age. 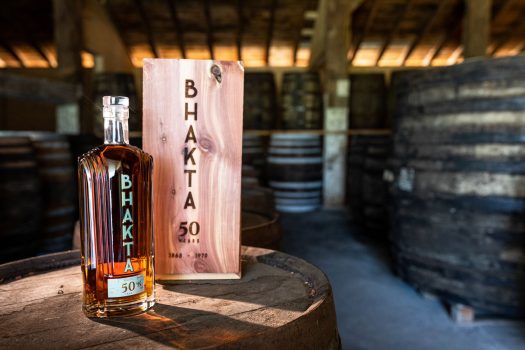 Drinkhacker: What are some of the misconceptions you get about Armagnac from spirits audiences, especially American?

Raj Bhakta: Some people just don’t like innovation, right? I mean, they have these deeply conservative personality sorts, whether it’s in politics or anything that just don’t want any change. And, you know, I’m glad for them that they’re happy with what they have, and they’re not people that are gonna change the world in any way.

Drinkhacker: You said that the biggest obstacle was actually getting drinks to lips. What’s the roadmap for releases distribution, and growing the brand, especially with extraordinarily limited supply?

Raj Bhakta: It’s brand building 101. It’s doing tastings, it’s getting the message out to writers. We also have this program called the stockholder program where people buy and collect. So you could, for example, buy a collection of bottles. You could buy two bottles of the 1980s, one to drink, one to keep as an investment.

Drinkhacker: If you could go back in time and tell yourself something 15 years ago about the spirits business, what would it be?

Raj Bhakta: Don’t get so high on your own supply.

Drinkhacker: How do you think content production in spirits — from the brand perspective — will continue to evolve over the next 5, 10, or 15 years?

Raj Bhakta: It has changed. I don’t know if I have fully mastered what’s cutting edge in 2022. So I’ve fallen back into a more old fashioned method. For example, in each bottle of Bhakta 50 comes a full book. And in that book, which I wrote, we start by old fashioned written storytelling with such big lines as, “Greetings, my friend, what you now possess is perhaps the rarest drink known to mankind. It is Armagnac brandy kissed by smoky Scotch casks. Over five generations, as empires and nations rose and fell, this brandy has slumbered. It represents an opportunity to taste ages past through a liquid whose very existence is miraculous.”

I believe in old fashioned storytelling. Also, I don’t have much to sell. We’re selling everything that we have available. What I want to do is build the brand right and well. Our objective is not volume, but to get people who are really looking to discover the ultimate in spirits and the people who want to share that discovery.

Most people think it’s interesting to find a new bottle of bourbon, which probably came from the same distillery as almost every other bottle of four to six year old bourbon. And it’s the same, but it’s got a different wrapper on it, and the poor consumer has been bamboozled right into thinking that it’s is something unique and interesting. Now, there is an opportunity: Why not have the 1980s vintages, why not collect vintage by vintage in the years that you remember? I don’t think I’ve ever talked to anyone in spirits who understands. 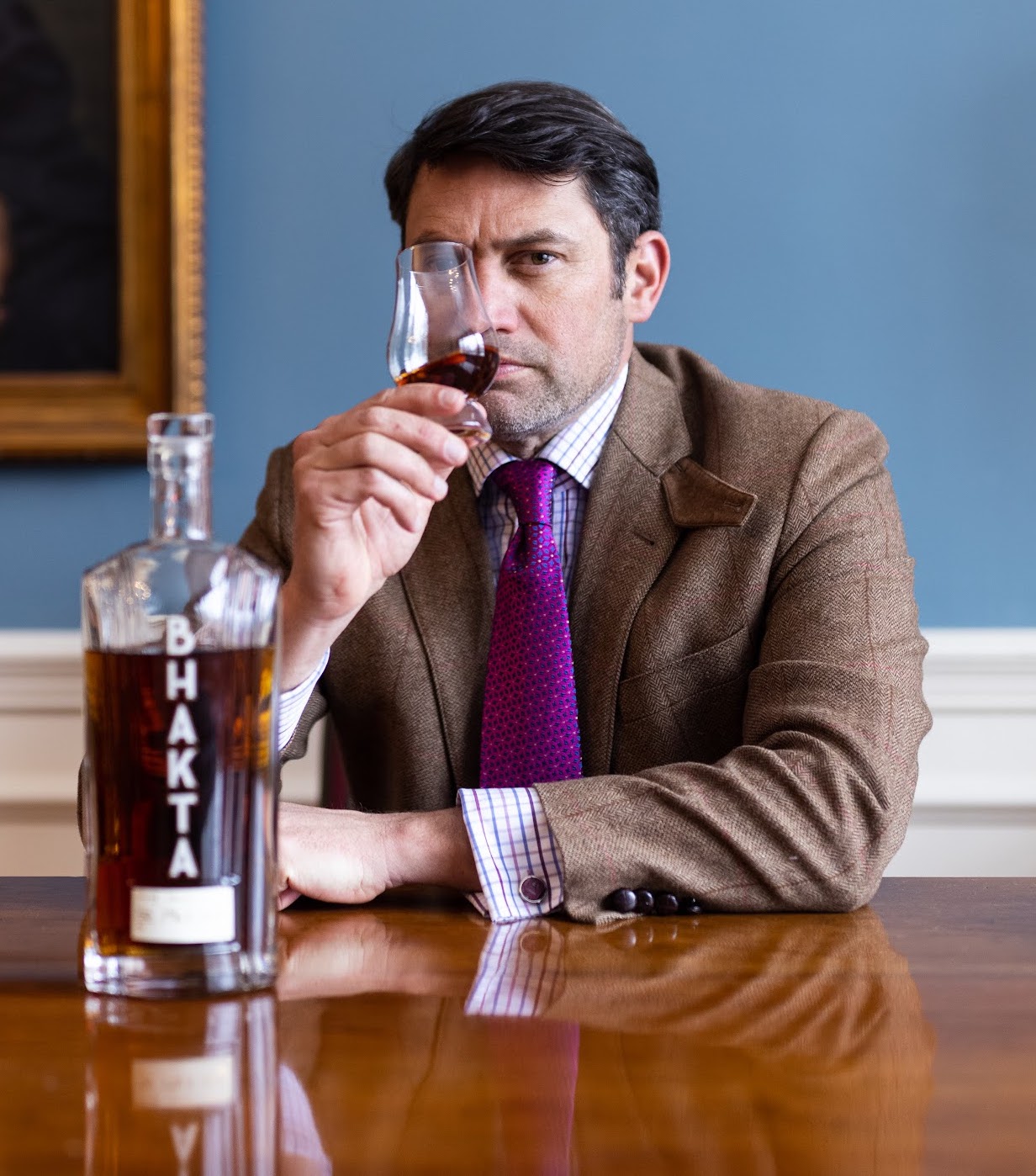