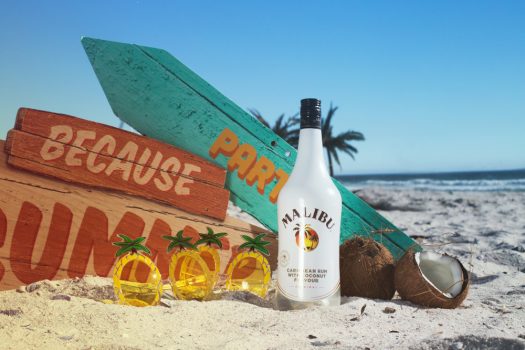 Once synonymous with coconut rum — and only coconut rum — the Malibu Rum empire now spans 9 different flavored rums, ready-to-drink canned cocktails, and even punch-in-a-bag concepts. The catch? Today, very little of this has coconut flavoring in it.

What’s Malibu made of? You might be surprised to know for starters that it’s made not in the Caribbean but in Canada. How is it flavored? Well, Malibu gets around the whole natural/artificial flavor issue by flavoring its rums with various fruit-flavored liqueurs, so there’s really no telling what’s in the mix.

Surprisingly we’ve reviewed only one of the six below expressions in the past — Malibu Black, in 2011. Various other Malibu releases we’ve covered were all special or limited editions and are no longer available — in some cases, mercifully.

So, with all that prologue out of the way, let’s dig into 7 of the 9 Malibu Rum offerings currently available (apologies to Strawberry and Tropical Banana).

Malibu Original – The coconut expression you know and love. Crystal clear, with a nose of fresh suntan lotion and a hint of industriality. Less sweet than you think on the palate, with ample coconut and an edge of toasted biscotti. It’s all very light and surprisingly fresh, not cloying nor syrupy in the slightest. In fact, at times Malibu can come across as a bit watery, a side effect of its mere 21% abv, but when whipped into a cocktail, no one ever notices. As harmless as it gets. 42 proof. B / $18 [BUY IT NOW FROM DRIZLY]

Malibu Mango – Very sharp on the nose, with a pungent industrial note and a harsh note of citric acid. I wouldn’t pick mango out of a lineup tasting this blind. The palate again evades fruit elements fairly deftly, offering notes closer to toasted marshmallow and graham cracker — quite sweet but not overblown. What’s missing alas is the tropical mango, though maybe there’s a note of candied (if a bit acrid) pineapple on the finish. Close enough? There’s easier/better ways to get mango flavor into your glass than this. 42 proof. C- / $18 [BUY IT NOW FROM DRIZLY]

Malibu Pineapple – Sharp, but fruitier, with that candied pineapple character clearer on both nose and palate. Far less industrial than the Mango expression, with ample sweetness. Very straightforward, which makes it rather unsurprising — save for a note of vanilla that lingers on the finish. Perfectly acceptable stuff. 42 proof. B / $18 [BUY IT NOW FROM DRIZLY]

Malibu Lime – Kind of a strange outlier in this tropical-heavy lineup, but perhaps more versatile for those 11 months of the year you’re not at the beach. This rides the line between sweet and sour fairly well, offering a fresh but punchy note of lime leaf, lightly dusted with white sugar. A bit aggressive when sipped on its own, it’s probably best reserved for emergency use for those times when you forgot to pick up actual limes at the store but you absolutely need to make mojitos. 42 proof. B- / $18 [BUY IT NOW FROM DRIZLY]

Malibu Watermelon – Classic watermelon character of the Jolly Rancher variety, this rum is ultra-sweet from nose to palate, with no nuance to speak of. You can thank that intense “watermelon liqueur” essence, you know, not candy that melted in someone’s pocket. Probably your best bet for trashcan punch, or nickel shot night. 42 proof. B- / $18 [BUY IT NOW FROM DRIZLY]

Malibu Passion Fruit– Passion fruit is one of my favorite tropical drink ingredients, and in Malibu’s expression it works as a handy cheat to the real — or real-ish — stuff if you’re in a pinch. Surprisingly rough on the nose, things settle down on the palate to showcase the floral fruit of the passion fruit (liqueur), though there’s minimal sweetness to cut through all of the funk of the rum. To be fair, the flavors are mild: If you thought this was mango, you probably wouldn’t be alone. It’s a bit tough on its own, but it mixes well enough to work as a quickie shortcut in froufrou cocktails. 42 proof. B / $18 [BUY IT NOW FROM DRIZLY]

Malibu Black (2022) – The darker, (much) higher-proof version of Malibu is certainly boozier, though the coconut character remains restrained. The extra alcohol gives Malibu Black some needed bite, but it comes along with some unfortunate harshness that the coconutty sweetness just can’t wipe away. There’s a slight berry note on the finish; back in 2011 I called it tropical and orange in note, but today it feels more like cherry. Strangely, it’s the same price as regular Malibu, which maybe says something about how cheap rum is vs. coconut flavoring. 70 proof. B / $18 [BUY IT NOW FROM DRIZLY] 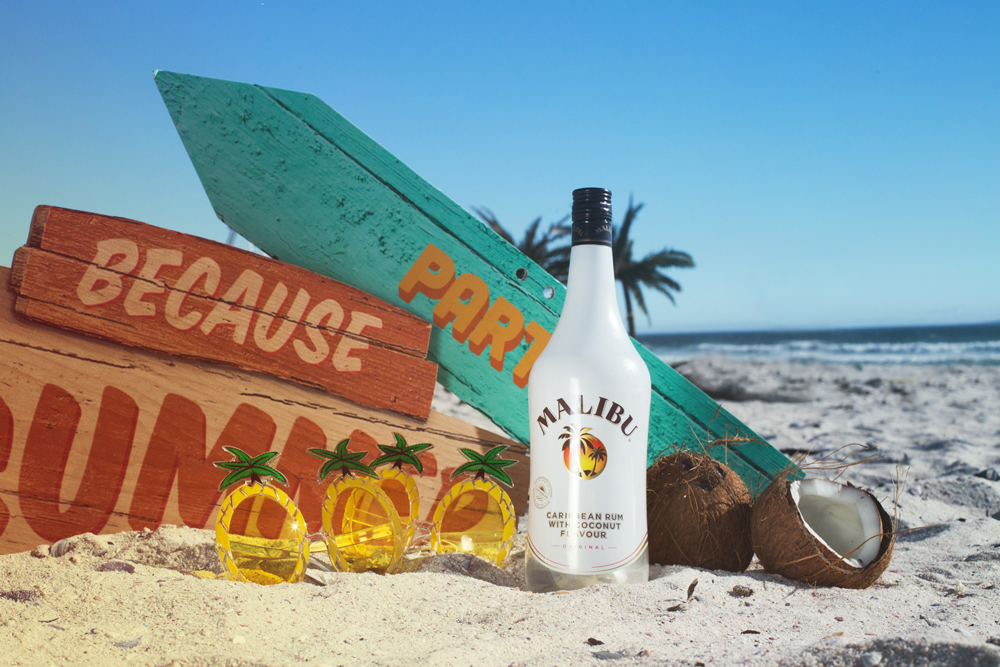