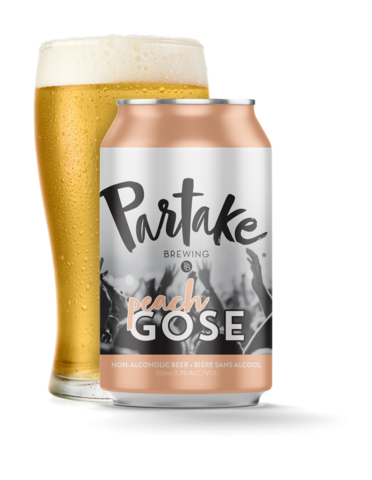 What to do if you’re an ardent craft beer lover but can no longer indulge? For Ted Fleming, it was to create non-alcoholic beers that would sate his high standards for craft brews and retain the social buzz of imbibing in the company of friends, a common origin story for many who have embarked on the near quixotic journey of finding a suitable substitute for such a beloved beverage as beer. This summer, Partake Brewing has added to their non-alcoholic* line of beers with a summer-time offering called Peach Gose, to bring their total varietal count to six different styles of NA brews which include an IPA, blonde, stout, pale, and red (which mimic English and Irish ales).

Let’s start pouring. And pour I did – into a pint glass, where a nice layer of foam floated to the top. (Good marks for presentation).

As for the nose, it is quite faint with the most detectable note of an almost perfumey, botanical peach — and not much else. The palate follows suit in both flavor profile and intensity (or lack thereof), but with added notes of soft, bitter hops. It is fairly watery once the carbonation subsides, which is almost immediate after hitting the tongue. The finish ends more on a botanical note, bordering that of a scented candle. (Which is not super enjoyable to drink.) The beer offered a reminiscence of sauvignon blanc, so much so that I poured myself a glass of 2019 Joel Gott Sauvignon Blanc that I keep as a staple in the refrigerator to compare. Uncannily, the Peach Gose drinks like a heavily diluted version of this sauvignon blanc, just with an undertone of hops and bitterness.

Even though I had to chase a bit for the notes and characteristics of this drink, I actually finished a whole can for this review (willingly). The beer is actually quite drinkable and grows more enjoyable over time — with none of the dull-headed drawbacks of drinking, making it a recommended option for when you want to kick back indefinitely with friends at a bar or on the beach. (As an added guiltless factor, it’s only 15 calories per serving.)

* technically the drink contains a de minims level of alcohol at 0.3% abv.

Head to Head: Alcoholic Root Beer! Not Your Father’s vs. Rowdy
Posted in Beer, Mixers/Non-Alcoholic, Rated B, Reviews