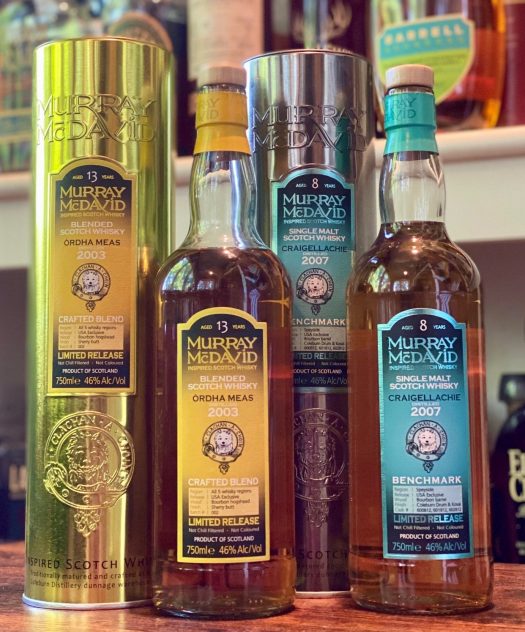 Independent whisky bottler Murray McDavid began sourcing and bottling Scotch in 1994, earning a reputation for using unique casks to age and finish their whiskies. In the 2000s, the company famously resurrected the Bruichladdich Distillery with the help of Jim McEwan, and after selling the distillery to Remy Cointreau in 2012, they set about concentrating more on independent bottling. In 2016, they introduced a new range of products, complete with color-coded packaging, to better showcase their considerable offerings. We recently received two samples from the early releases, one from the Benchmark series, essentially their core portfolio of single malts, and another from the Crafted Blend series, in-house blends of single malt and single grain.

Murray McDavid Benchmark Craigellachie Single Malt 8 Years Old – This single malt, a blend of three casks, was distilled in 2007 and bottled in 2016. It was finished for an unspecified amount of time in a “Coleburn Drum,” a specially coopered cask that resembles a bass drum, and a 110-litre cask from Chicago craft producer, Koval. The aroma is fresh and toasty with rich malts and buttery graham crackers. As it opens, a bit of nectarine emerges, adding a nice brightness to an otherwise cereal-heavy nose. The palate is, at first blush, classic Craigellachie with lots of juicy citrus, vanilla bean, and honeydew melon. It’s oily with enough spice to keep the taste buds tingling, but the flavors are all a bit frontloaded, bursting on the first sip and receding quickly into a more rustic finish. 92 proof. B / $75

Murray McDavid Crafted Blend Órdha Meas 13 Years Old – This 2016 release comprises single malt and single grain whiskies from Highland Park, Glenrothes, Glengoyne, Port Dundas, and Cameronbridge, all distilled in 2003 and finished in sherry casks. The nose on this one is brooding with an ashy, damp smoke that smothers the somewhat sweeter notes of toffee and delicate dark fruits, even with considerable time to open up. The palate showcases a thick, peppery mix of baked pastries, raisins, roasted nuts, and a brûléed bananas, turning to green apple and shortbread before all of it returns to the campfire with a heavy note of salty, coastal smoke. The finish is medium with more sweet smoke and a fading bit of poached pear. 92 proof. B+ / $50 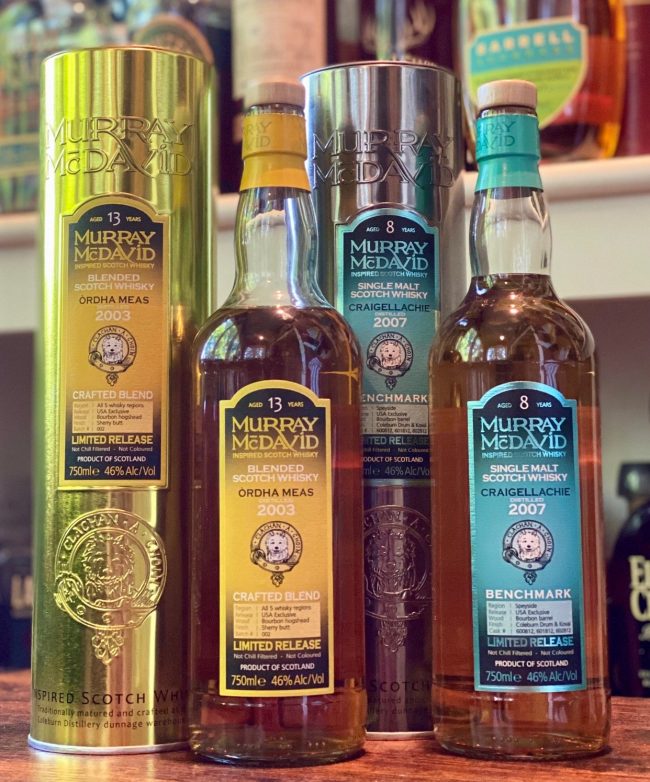