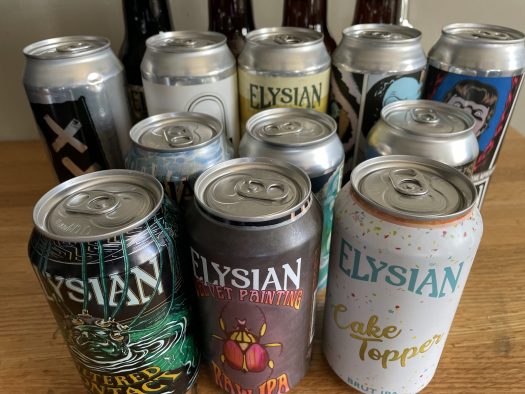 In celebration of 25 years in business, Seattle’s Elysian Brewing recently put together the mother of all mix packs: 25 “greatest hits” beers (plus a bunch of fun additions) packed in a monstrous box. I figured this was the perfect chance to take a deep dive into Elysian’s extensive offerings, some of which we’ve reviewed before, some of which are new to us. (As well, some are special editions that aren’t publicly available.)

Good news if you live in Washington state: You can pick up one of these kits yourself, or have it shipped to you. Alas, those out of state will have to make the drive to Seattle to pick one up.

Brief reviews of all the beers in the kit (somehow I seem to have misplaced two of them, hence the 23 instead of 25) — ranked in order of preference — follow. Happy birthday, Elysian!

Elysian Space Dust IPA – Space Dust has long been my favorite Elysian beer, and one of my favorite IPAs in general. (It’s also Elysian’s best selling product.) The beer straddles the line of bitter and juicy fruit well, its earthy hops perfectly countered by an ample tropical and citrus character. Chewy and immersive, with some gently floral lime leaf notes on the back end. For any IPA fan, there’s still nothing not to like here. 8.2% abv. A

Elysian Contact Haze IPA – Elysian’s hazy IPA is a classic in flavor, though it doesn’t have a ton of actual haze to it. I love the lemon note, balanced by toasty hops and gentle earthiness. 8.8% abv. A

Elysian Prometheus IPA – West coast style IPAs aren’t on top of the heap at the moment, but Prometheus is evidence of why the style became hot in the first place. Boldly hoppy and resinous, with subtle layers of orange, mango, and guava, it’s a silky powerhouse with massive length. I would have sworn this was much higher in alcohol. 6.7% abv. A

Elysian Full Contact Imperial Hazy IPA – A bruiser at 8.8% abv, but loaded with flavor that blends the tropical notes of a hazy with the unctuous creaminess of an imperial IPA. Full of citrus, vanilla, lemon, and piney hops, it’s yet another killer IPA from Elysian. 8.8% abv. A

Elysian Scarlet Fire IPA – Brewed with a technique called first wort hopping, which involves adding finishing hops to the boil kettle as the wort is transferred from the mash tun. I have no idea what the purpose of that is (it seems to raise the IBUs), but it makes for a sold IPA, this one quite creamy, with a bold, west coast attack. The hops get a bit thick after awhile, but the depth of flavor is impressive. 7.2% abv. A-

Elysian What’s the Password? Tiki IPA – A brand new beer, made with pineapple puree, brown sugar, toasted coconut, nutmeg, orange zest, and lactose. It’s the coconut (plus lactose) that makes the biggest splash here — making for something closer to a pina colada than a mai tai — the supersweet pineapple kicking in on the outsized finish. 9.3% abv. A-

Elysian Velvet Painting Raw IPA – Brewed at temperatures below boiling, this rounded, creamy, and attractive IPA has a fun banana note that pair well with its citrus underpinnings, with enough rolling hops character to give it a punchy and lasting bitterness. 7.2% abv. A-

Elysian Snailbones IPA – A nice layer of orange and grapefruit gives Snailbones’s piney core a lift, but the body ultimately feels a touch on the thin side. I get a hint of spice and some vanilla on the lengthy finish. 8.5% abv. A-

Elysian Dragonstooth Stout – A big, imperial oatmeal stout with all the trimmings: chewy cereal, an aggressive chocolate and coffee bean note, and a syrupy, enduring finish that offers flavors of molasses and maple. A bit daunting perhaps for the Guinness set, but for fans of outsized flavors in their stouts, this brew hits the spot. 8.1% abv. A-

Elysian The Immortal IPA – A kooky interpretation of English pale ale by way of the Pacific Northwest. The result features biscuity Bass Pale Ale notes alongside the piney, earthy hoppiness one expects from the west coast. The combo works, though it hardly rips up the west coast IPA playbook along the way. 6.3% abv. A-

Elysian Scourge – A goji berry sour ale with blueberries, “the 13th beer of the apocalypse.” Boldly fruity and moderately sour, this rarity has a raspberry-like punch with a fresh, tart finish — bracing in its acidity, almost vinegar-like at times. It’s so cleansing and bright with its citrusy conclusion that it becomes hard to put down. 5.2% abv. A-

Elysian Altered Contact Tart IPA – A hybrid style sour IPA, with the needle pegged clearly on the IPA side. Some tart lemon juice serves as a curious counterpoint to the spicy, hoppy backbone. That helps to temper the beer’s earthier elements — though that comes at the price of some of the IPA DNA. 6.8% abv. B+

Elysian Avatar Jasmine IPA – Brewed with dried jasmine flowers, this is a literal interpretation of a  “floral” IPA. Things start off fragrant and immersive, then the jasmine character becomes overwhelming, heavy with notes of perfume and a layer of baking spice. Dusky hops make for a curious counterpart. Good for one bottle, but a little goes a long way. 6.3% abv. B+

Elysian Cake Topper Brut IPA – Brut IPA was a fad for a hot minute in 2019. Turns out Elysian still makes one, Cake Topper, a crisp offering that gets its name from an infusion of creamy lactose plus a kick of vanilla and guava. It’s kind of a weird combination, this ultra-dry attack that winds its way toward the fruit stand, thanks mainly to the slightly funky guava inclusion, which gives the finish a note of overripe tropical fruit. 6.5% abv. B+

Elysian The Wise ESB – Boldly malty, toasty, and bready — and quite coffee-like at times. Your British pub experience is on point here, all bitterness and austerity; authentic to be sure, though it’s not a style I overly gravitate to. 5.9% abv. B+

Elysian KEXP Mixtape!  – A blood orange milkshake IPA, this monster of a beer pairs blood orange and vanilla notes with a surprisingly funky nose. It’s a bit green on the finish, but the tart blood orange notes perk things up unusually. 6.4% abv. B+

Elysian Salt & Seed Watermelon Gose – Less weird than I remember it, though this time around the fruity sour comes across with more salt in the mix, the juicy watermelon notes taking more of a back seat. It’s a combination that remains fun, however, and the ultra-low abv makes for a summery bonus. 4% abv. B+

Elysian Night Owl Pumpkin Ale – A classic and lightly sweet pumpkin beer, well-spiced and lightly sweetened with brown sugar. It’s not a style that I gravitate to, but this rendition is better than most of what you find in the field, boosted by a balanced finish that keeps some bitterness in the mix. 6.7% abv. B

Elysian Superfuzz Blood Orange Pale – The addition of orange peel and blood orange to this brew sounds enticing, but the citrus never really punches through the substantial and rather muddy west coast character. 6.4% abv. B

Elysian Loser Pale Ale – Brewed with unusual Sorachi Ace hops, this strange brew melds hops and fruit — both citrus and tropical — into a fitful whole. Aromas of barbecue spice, kelp, and tons of malt give this a strange sense of place — albeit one that is at least worth talking about. 7% abv. B

Elysian Dreadwood Derby Oak Aged Imperial Stout – This fizzy oddity has the alcohol of a barrel-aged stout, but it’s lacking the depth of flavor one expects from this genre. The beer toys with notes of coffee bean, vanilla, and (oddly) black pepper, but the finish takes a weird detour that features notes of roasted meats and burnt pretzels. This one’s just not in Elysian’s wheelhouse. 9.3% abv. B-

Elysian XXV 25th Anniversary Coffee IPA – The beer brewed especially for this box is the least interesting in the bunch, an IPA with coffee in it. The combo’s a miss here, hitting the nose with a pungent, almost burnt, dark roast espresso note, which doesn’t offer much in the way of balance with the piney but indistinct hops that lie underneath. The result is a beer torn in two directions, neither of which is altogether satisfying. 9.3% abv. B- 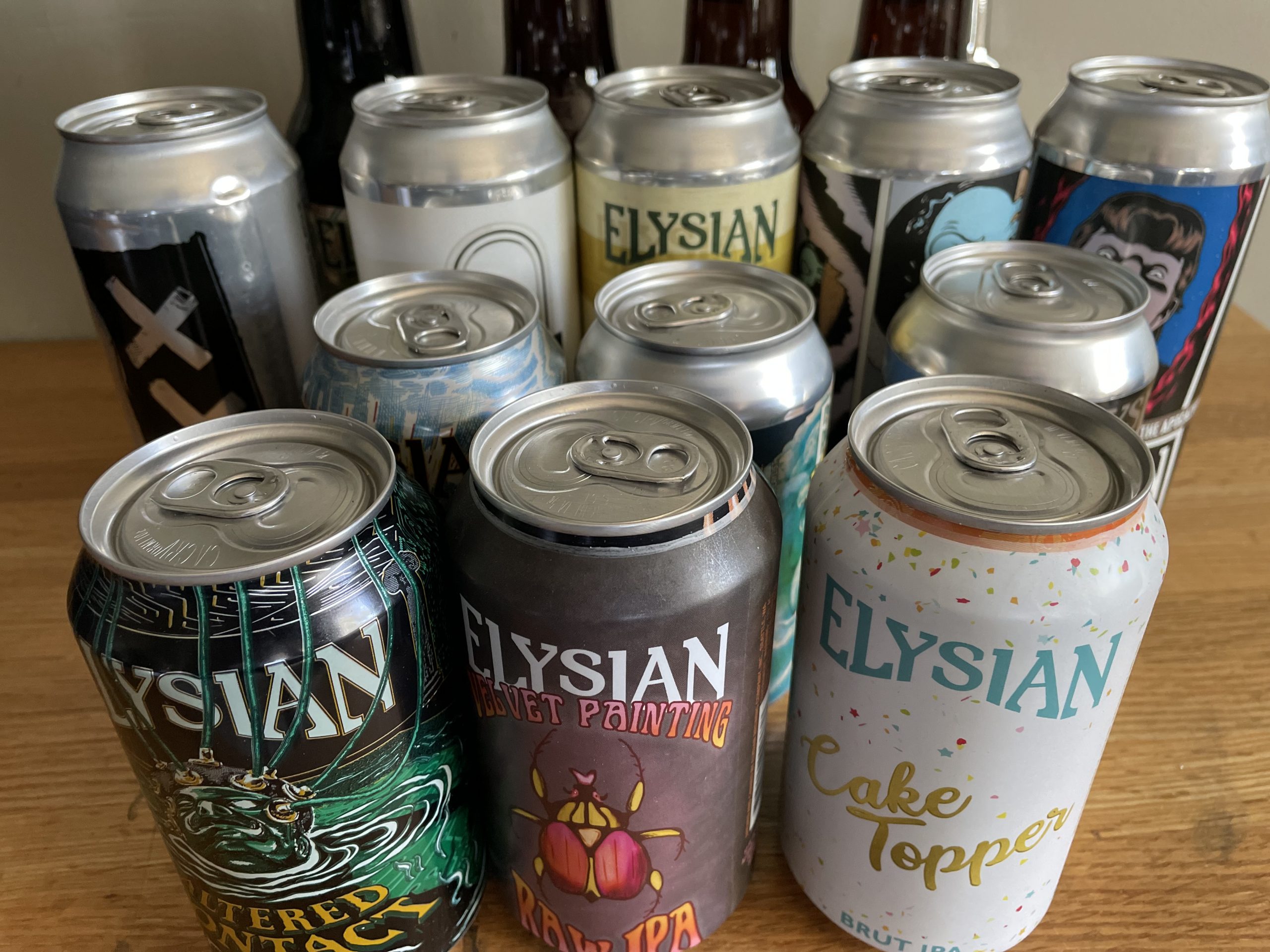