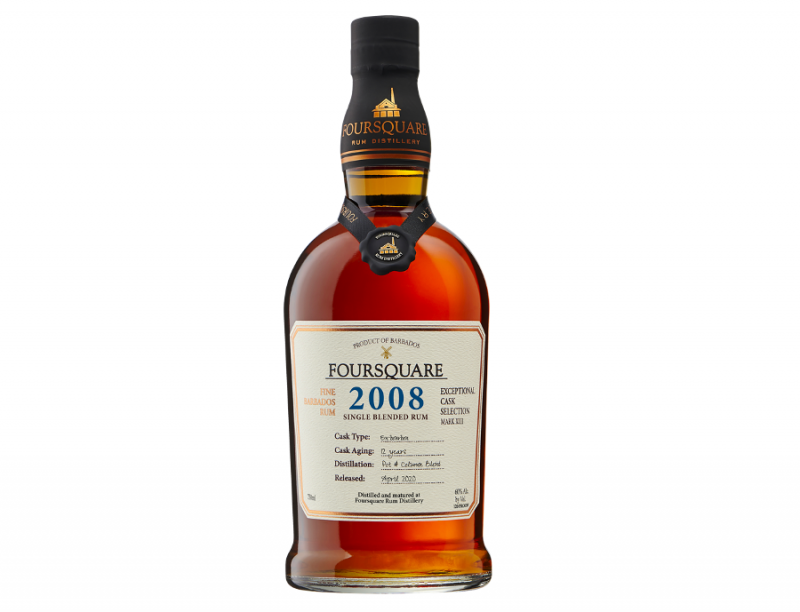 Rum has undergone something of a resurgence in the last decade, and while it still pales in comparison to the whiskey boom, there are lots of unique and interesting brands finding more and more markets and winning more and more fans. One of the distilleries responsible for the growing excitement around rum is Foursquare in Barbados, which began distilling rums on both pot and column stills in the late 1990s. Master distiller Richard Seale has been a pioneer in promoting unadulterated rum (rum without added sugar or wine), and his single distillery, higher proof, and cask strength releases have earned his brand the honor of being dubbed the “Pappy of Rum.” We received samples of the distillery’s Probitas white blended rum and Mark XIII 2008, a vintage-dated release from the distillery’s Exceptional Cask Selection series. Thoughts follow.

Foursquare Probitas White Blended Rum – With a name meaning “honesty” in Latin, this rum is clearly intended to demonstrate Foursquare’s dedication to unadulterated rum, especially in a category notorious for added sweeteners. It’s a blend of unaged column-still and aged pot-still rum from Foursquare plus an unaged pot-still rum from Jamaica’s Hampden Estate. Crisp and almost juicy on the nose with pineapple, white peach, and vanilla bean, interlaced with a subtle but unmistakable hogo element from the Jamaican component. A bit of brown sugar adds richness to complement the lighter fruit notes. The palate is light and airy with a restrained yet oily sweetness and gentle heat. Notes of ripe banana and toasted sugar add modest complexity. Flavorful, weighty, and just dry enough for a great rum cocktail. 94 proof. A- / $25 [BUY IT NOW FROM DRIZLY]

Foursquare Mark XIII 2008 Single Blended Rum – This is a single blended rum, meaning all components were produced at Foursquare’s distillery. It’s a combination of pot- and column-still rums aged in first, second, and third fill ex-bourbon barrels for 12 years. This may be one of the biggest and most fragrant noses I’ve come across in a rum. Notes of sweet sandalwood, coconut macaroons, and buttery Snickerdoodles give way to a bit of cedar closet, sassafras, and rich molasses. The palate is similarly bursting with flavor: gingerbread and toffee, salted caramel and grilled pineapple, even a bit of minty bubblegum and a hint of lychee fruit. All of that complexity rides an even, easy heat into an indulgent, dessert-like finish of rootbeer float, Andes mints, and candied pineapple. Rum fans need to seek this out. Now. 120 proof. A / $100 [BUY IT NOW FROM DRIZLY]