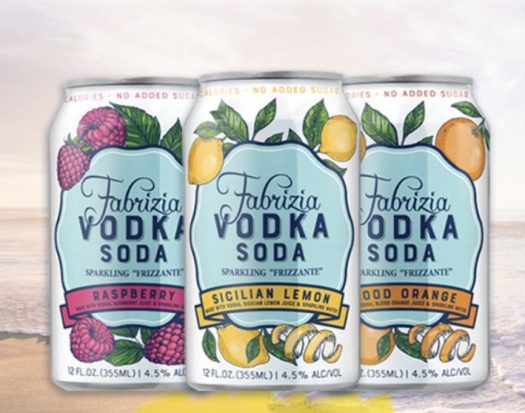 Fabrizia Spirits, based out of Salem, New Hampshire, is the leading producer of limoncello in the U.S. It has been expanding its line of liqueurs and ready-to-drink cocktails over the past few years, some of which we have reviewed here at Drinkhacker. (Links can be found to our previous reviews here: July 2016, February 2019 and June 2019.)

The newest additions are Fabrizia Vodka Sodas, ready-to-drink, low-sugar, low-calorie “sparkling frizzante” canned cocktails. As the name suggests, these are vodka spritzers that the company states are made with “crisp sparkling water, real vodka, and flavored with only real juice, nothing more.” Also new to the lineup is a frozen version of its canned cocktails (we previously reviewed the Italian Lemonade).

Let’s take a tour of the latest offerings.

Fabrizia Vodka Soda Sicilian Lemonade – The drink is as advertised, vodka served with a splash of soda and a squirt of lemon. The vodka is pronounced but clean, the sparkling water is crisp with just the right fizziness (it’s not as effervescent as seltzer but slightly more satisfying than Perrier), and the lemon is fresh, tart, and zesty. Nothing artificial or sub-standard in the ingredients — and no added sugar, so one should not expect a fruit-forward cocktail in the conventional sense. This is a vodka drink for the ardent vodka drinker that’s looking for a lighter, brighter preparation of their favorite spirit for summer sipping. 4.5% abv. A- / $10 for 4-pack of 12-oz cans

Fabrizia Vodka Soda Blood Orange – The color is a surprisingly bold shade of pink that made me skeptically expect a more saccharine presentation of the blood orange flavor. However, the fruit — and the drink overall — is rather subdued (although the bitter citrus rind is a bit more pronounced), perhaps a little more than it needed to be, which may be due to blood orange being less tangy than its counterparts in the citrus family. It is still a very clean and easy vodka sipper, if not a tad lackluster when compared to the Sicilian Lemonade. 4.5% abv. B / $10 for 4-pack of 12-oz cans

Fabrizia Vodka Soda Raspberry – One usually does not nose a soda cocktail but the aroma caught my attention since it felt as if I just popped open a container of fresh, ripe raspberries. The taste follows suit; it’s as if the vodka and seltzer were steeped in fresh raspberries for days (which also imparted a deep fuchsia hue to the drink). The vodka is very subtle, although there is a kick to the tartness of the raspberries that may be accentuated by the vodka. Berry is one of the most difficult flavors to execute in a RTD product; the berry character tends to be faint, so products often add sweeteners or other enhancers. Not here: The raspberries taste like the fruit, which may make the drink a little to tart or dry for some. For me, this is one of few berry flavored drinks that I may actually reach for even with other options around. 4.5% abv. B+ / $10 for 4-pack of 12-oz cans

Fabrizia Italian Margarita Frozen Cocktails – These are ready-to-freeze sleeves of Fabrizia’s Italian margarita, which was reviewed by us here. What makes this margarita “Italian” is the addition of Fabrizia Limoncello alongside lemonade and tequila. Similar to the canned cocktail, the tequila is a bit brash here. The lemonade is lightly sweetened and possibly leans too tart for some. It’s a nice frozen treat all the same. 7% abv. B+ / $19 for a 12-pack

Fabrizia Italian Lemonade Frozen Cocktail – This is unabashedly a frozen lemon-infused vodka. It’s barely sweetened, but has the zestiness of fresh-squeezed lemons. Put differently, if you infused lemon wedges into vodka for a few days, froze the wedges, then took a bite into the icy concoction, this is what you might get. Again, this can come across too tart for some, but it can also make for a very refreshing icy treat on a hot humid summer day without any cloying sweetness. To each their own on taste, but there’s no denying how well they executed on retaining the freshness of the fruit. 7% abv. B+ / $19 for a 12-pack 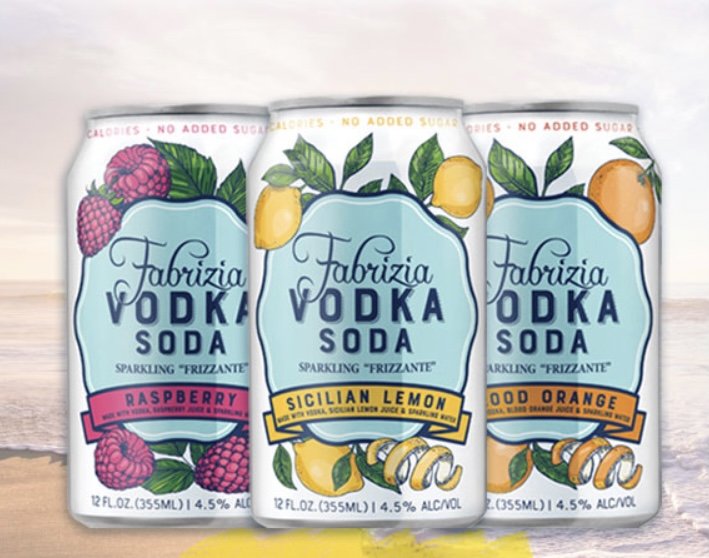