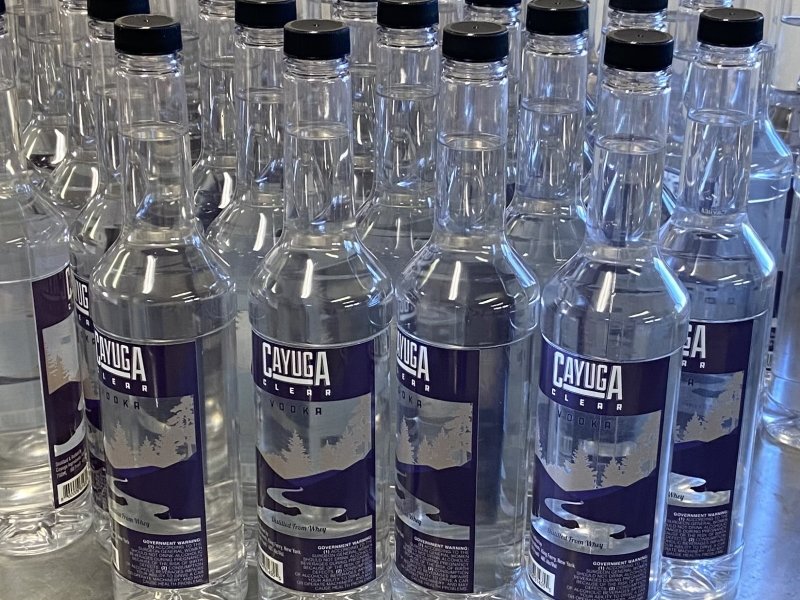 Vodka can be made from many things, basically anything that has starch or sugar in it — like potatoes, grains, grapes, or sugar beets. Black Cow Vodka in the UK makes vodka from milk, and we’ve reviewed a couple of New Zealand vodkas that are made from whey. Whey is what’s left over when you turn milk into cheese, and unfortunately most of it is either given away as animal feed or dumped into landfill, or even simply dumped into rivers.

Fortunately some people are now realizing you can distill whey, and turn it into vodka. Cayuga Ingredients in the Finger Lakes area has been processing whey for 15 years and turning it into ethanol, which is then sold for fuel or sold to distilleries as white spirit. They process whey from big names they are apparently not allowed to say, but they’re names you’ll see on the cheese shelves of every large or small grocery store in the U.S.

Eventually someone at Cayuga seems to have realized that instead of selling their ethanol on to other people to turn into commercial vodka, gin, whiskey or whatever, they could do it themselves. So they bought a distillery that was going out of business, and started to produce their own Cayuga Clear Vodka.

The first thing you notice is that the bottle isn’t glass but plastic. It’s made from PET, which stands for polyethylene terephthalate. It’s as recyclable as glass but lighter to transport and friendlier on the environment.

On the nose, the vodka is very vanilla-creamy, and slightly nutty. There’s a warmth about it, a hint of raisins, and a little lemon citrus. These things all come through on the palate, but also that’s unfortunately where the alcohol also comes through quite strongly. It’s curious in that while it’s really pleasant to sniff, it’s less pleasant to sip on straight. The good news is that mixed with tonic or OJ or something else, it makes a brilliant cocktail using vodka that is dirt cheap. The bad news is that at the moment it’s only available online to New York state residents.