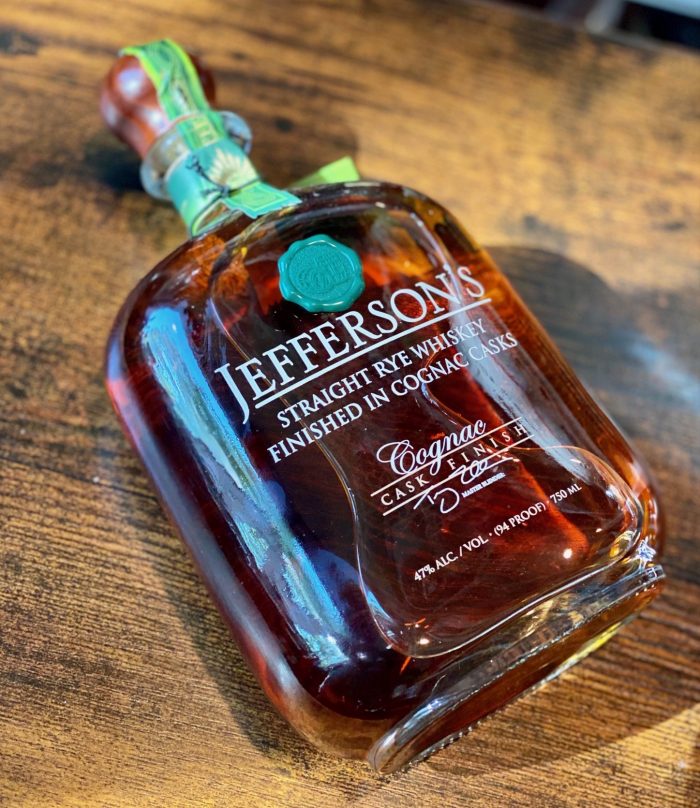 Jefferson’s has plenty of bourbons in its stable, from Very Small Batch to the Ocean series and a variety of wine finishes and special releases, but the company has only once, in 2008, released a rye whiskey. Owner and blender Trey Zoeller is giving rye another go with this latest release, but this time, the whiskey has been finished in Cognac casks. Although the bottle doesn’t denote it specifically, this is reportedly a Kentucky sourced rye. It spends at least nine months (but up to 19) resting in ex-Cognac casks. Finished whiskey is definitely a hallmark of the Jefferson’s line, and we’ve tasted some hits and misses from the company over the years. Let’s see how this new rye fares.

The nose is soft and grassy with sweet cereals, honey candies, and a bit of sharp rye spice that comes across as a touch rubbery. Fresh oak and dried stone fruit notes help to elevate the experience somewhat, but it remains overall pretty coarse and earthy. The palate is honeyed with a nicely rounded mouthfeel and notes of white pepper, clove-studded orange, and grated nutmeg. Those flavors don’t exactly jump out at you, however, coming across more muddled and somewhat saturated in simple syrup. The finish is lengthy with subtle notes of peach candies and lemon peel, but that bland, syrupy sweetness dulls some of those brighter notes and gives things a watery feel. Jefferson’s fans who love the approachability of a bourbon like Very Small Batch will probably find plenty to like here, as the finishing has clearly smoothed out the rougher edges on this rye. For me, it’s just a little too unbalanced, choosing sweetness and texture over complexity.