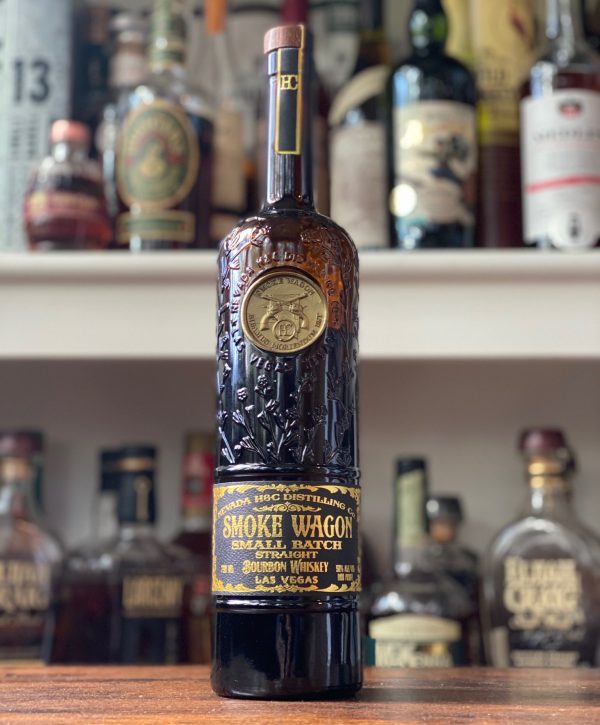 Smoke Wagon is the It Bourbon brand of the moment. It hails from Las Vegas’s Nevada H&C Distilling Co., and while its four expressions are all sourced stock from MGP, consumers have taken a shine to them all the same.

In this review we look at Smoke Wagon Small Batch, a high rye bourbon which was first released in 2016. According to the company, it is the product of blending a young bourbon with an older vintage bourbon to meld the mouthfeel from the old with the bold spiciness of the young.

I tasted the whiskey multiple times from a fresh bottle as well as several days later. Let’s get to it.

The initial nose is heady with raw wild clove honey and a pop of crisp sweet apple. Over time a nice tawny Port aroma comes forward. There is surprisingly very little heat on the nose even at 100 proof. You almost have to hunt for any burn with a mighty whiff.

The soft mouthfeel is met with an assertive heat and warmth that settles throughout. The palate initially offers some fireworks — hot cinnamon packing a punch of Red Hot candies, rich creaminess akin to Scottish butter cookies, and a bitterness dry and heavy with sun-baked leather and oak. The intensity scales back in time, but it retains a welcome level of heat on the whole.

The finish initially feels impossibly long. The flavors fade, but they never seem to fully disappear. A bit of malt starts to peek out under the seemingly infinite leather notes at the fade-out. My later experience however showed a markedly shortened finish, though it still offers notes of lingering Red Hots.

The Small Batch expression is approachable enough with a heightened signature kick of spice which seems to be the magic that’s drawing fans. Alas, I do wish that initial, spicy luster had a longer lifespan.