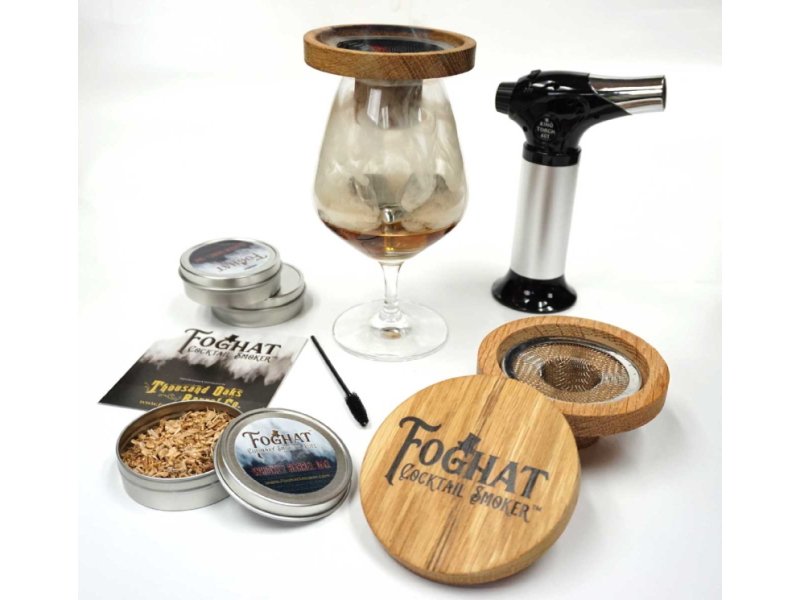 The pandemic has seen a huge upsurge in the number of ready-made cocktails in cans and bottles on the market, as people have adjusted to drinking at home more often. While there are some incredibly good pre-mixed cocktails available, there’s still nothing to beat a freshly-made cocktail creation of your own, especially when you have visitors.

The Thousand Oaks Barrel Co., which mainly sells, well, barrels, has now come up with a gizmo that allows anyone to emulate the professional mixologist and put on a bit of a show. Well, actually they haven’t come up with it. It was invented by an Englishman, but Thousand Oaks has brought it to the U.S. market.

The Cocktail Smoker is an ingenious device that allows you to smoke your own spirits or cocktails. The kit includes a round wooden holder that sits in the top of your glass. Inside of this you place a metal sieve-like device, into which you place some small wood chips. In our case these were Whiskey Barrel Oak chips, though other types of wood are available such as Sherry Toasted Oak, Devil’s Rum Punch, and Peat Bog Fog, which sell for $9.95. You only need a pinch of chips for each drink, so a tin of chips should last a while. The kit also includes the kitchen burner, complete with canister of propane.

After nervously reading through the very detailed precautionary notes, I chose a bottle of Speyburn 10 Years Old, which was almost empty, to experiment with. It’s a whisky with only the slightest touch of smoke about it. One drawback to the Foghat is that you can only do one glass at a time, but that’s easily remedied by using big glasses.

Feeling a little like the mad professor, and slightly put out that my wife suggested we do it outdoors, I assembled the parts and set the chips to burning. You pop the wooden top on the device, which is about the size of a coaster, set the chips ablaze, and wait. The resulting swirls of smoke go down into the glass and into the whiskey. It’s suggested you leave it for about three minutes, which I did, though I’m sure I’ll be experimenting.

I stirred the glass and split the whisky in two. The result was interesting: a Speyburn that had become more like a peaty Islay whisky. Whisk(e)y connoisseurs who know their whiskies much better than I do will have a field day with this.

I then had the bright idea of making a regular margarita, the way I always do, and tried smoking it. The outcome this time was definitely a keeper, a margarita that tasted as if it had been made with mezcal rather than tequila. Apparently you can also smoke food with the device, like cheeses and meats, and hopefully my wife will now let me try it in the kitchen. Where’s that smoked crème brûlée recipe?