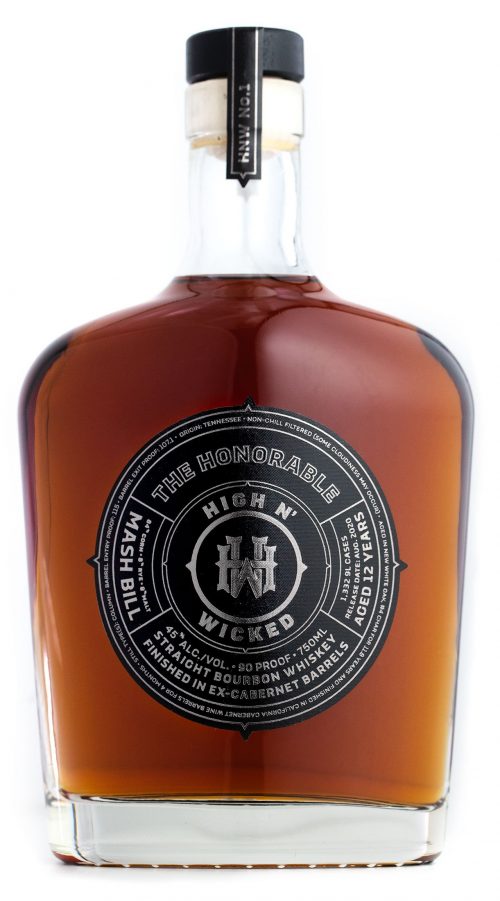 High N’ Wicked is a new whiskey brand based out of Jackson, Wyoming, but beyond that, there’s not a lot I can tell you about their operation. It’s almost certainly a non-distilling producer, as their stated mission is to “present and develop unique American whiskies – releasing singular expressions annually that it deems worth of its name.” The Honorable is their first limited edition, although it remains to be seen whether they will release anything other than limited editions. Anyway, to kick things off in that department, High N’ Wicked has taken a 12-year-old Tennessee whiskey (most likely George Dickel, based on the mashbill) and finished it for four months in ex-California cabernet barrels. Let’s check it out.

On the nose, The Honorable really impresses with a big, rich aroma of dried fruits, saddle leather, and cigar wrapper. The wine finish hasn’t overpowered the barrel notes, making for a nice balance of sweet pralines, seasoned oak, and currants. On the palate, it’s a bit of a different story, with an initial wine-kissed sweetness that never really lets up. It’s oily with a generous body and a welcome bit of warming, minty spice. The mid-palate sees baking spice and butterscotch trying to muscle in on the dark fruit action, but the balance there is fleeting as the finish returns to fruitier form with lingering, syrupy dark berry notes and winey tannins. One of the better executed, wine-finished bourbons I’ve encountered and worth exploring, especially if you’re a fan of wine-finished American whiskey.