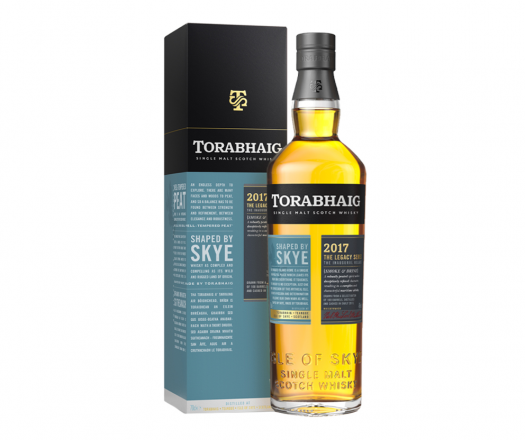 Opened on January 1, 2017, Torabhaig is the first new distillery on the Isle of Skye (where Talisker is the main offering) in nearly 200 years. The distillery is part of the Mossburn mini-empire, which much like an American craft producer, started as a blender of other people’s whisky — from all over Scotland — while its initial stock was aging. Now its first in-house distillate has arrived, carrying the name of the distillery — Torabhaig — instead of the parent operation. (We’ll be covering Mossburn’s spirit in the near future.)

Torabhaig is staking its claim on having a “legendary fruity taste,” although said taste is just 4 years old and, perhaps, of premature age to merit legendary anything. Nonetheless, we received a sample of its inaugural release, Legacy 1, distilled in 2017, to see how things are coming along. Many more offerings are in the works from Torabhaig, so stay tuned for updates.

The whisky’s nose has a sizeable peat influence, a briny punch of iodine, fresh asphalt, and sea spray which wouldn’t be out of place at any Islay operation. There’s a fruity sweetness underneath, however, notes of green banana foremost among them. On the palate, a moderated smokiness takes hold at first, a classic iodine/smoked kipper note, again balanced by some supple sweetness. I wouldn’t call this “legendarily fruity” by any stretch, but there are notes of stone fruits, applesauce, and banana custard that lift it out of the bog pretty handily. The finish has a savory, beefy quality to it that feels a bit heavy and blunt — and $70 for a 4 year old whisky is on the high side — though one can see the promise that Torabhaig might hold once its stock hits the 8 to 12 year old mark.