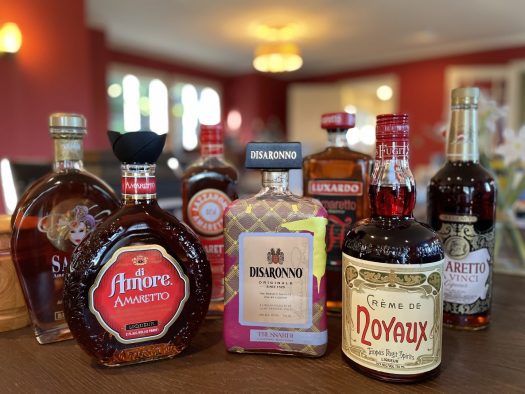 Amaretto has been part of the cocktail world since at least 1851, when history says the liqueur was invented. While amaretto — Italian for “a little bitter,” a diminutive of amaro — is now thought of as an almond-flavored spirit, the reality is that most amaretti do not contain any almonds at all. What they’re going for is called benzaldehyde, a natural compound that invariably tastes like almonds, but which can be derived a lot more inexpensively from other sources, including apricot and peach pits. Added sugar is de rigueur, and most amaretti are also loaded with spices and caramel color.

One story tells us that the original amaretto, Lazzaroni, wasn’t made with fruit or nuts (directly) but rather baked goods. The Lazzaroni family first baked the almond-flavored cookie they called amaretto in the 1780s and by 1851 decided to answer the question: What would happen if we soaked these cookies in alcohol and turned them into booze? And so amaretto the liqueur was born. Naturally, Disaronno also lays claim to being the original amaretto liqueur, this one born as a love potion invented in the 1500s.

Whatever the true story of amaretto’s origin, the market for this rather unsung ingredient has exploded, with artisan offerings and mass market options both available. How much do they differ? And which one is best? We put our taste buds on the line to find out.

All were primarily tasted neat. Here’s our official ranking, from best to worst — though in all fairness, none of these liqueuers were unpalatable.

Lazzaroni Amaretto – The original, still made in Italy (but now owned by the Laird apple brandy empire), and still purportedly made with cookies infused in alcohol. Lazzaroni has a bold almond nose, with gentle notes of vanilla and some light maple syrup elements evident. Quite syrupy in texture, it’s a sticky and very sweet liqueur, but this oddly works to its favor, giving the concoction a real enduring, dessert-like character. It does indeed taste like a sweet yet lovely cookie, though there’s more vanilla and a hint of cake frosting on the finish than you might expect; that said, it pairs beautifully with the almond notes up front, reminding me of a marzipan-frosted princess cake at times. A lingering touch of gingerbread rounds things out. My favorite by a small margin. 48 proof. A- / $26 [BUY IT NOW FROM DRIZLY]

Luxardo Amaretto di Saschira – Italian, made from the pits of apricots, peaches, and — fittingly — cherries. While nose is loaded with almonds, there’s definitely a fruitier note on the palate here, though it’s well-integrated with the nuttier components and a hint of sweetened coconut milk. The sweetness here is par for the group, but it’s complemented by the fruitiness, which does indeed offer a distinct note of Marasca cherry — and which works surprisingly well, especially as a mixer. Overall it’s an excellent and complex amaretto. 56 proof. A- / $29 [BUY IT NOW FROM DRIZLY]

Disaronno Originale – Italian, made from apricot kernel oil. The most iconic of amaretti, Disaronno is quite sweet, with a fairly straightforward almond nose and flavor. The baking spices in the mix here are prominent, with cinnamon and nutmeg melding nicely with the liqueur’s buttery body, but the finish gets sweeter as it goes, culminating in a thick slick of what can come across as maple syrup clinging to the back of the throat. Best when mixed. 56 proof. B+ / $30 [BUY IT NOW FROM DRIZLY]

Amaretto di Amore – This unique expression is produced in Kentucky (by Sazerac), made from bitter almonds and blended with apricot juice. A budget bottling, it noses with sweet, fresh almond paste notes, but what hits the palate here is surprisingly loaded with a big chocolate character, tempered by more almond extract and a hint of ripe banana. Mysteriously, I never get apricot in the mix at all. Its candy bar character makes it the most dessert-like amaretto in this bunch, and at a whopping 21% alcohol, it feels tailor made for dumping over ice cream. I wouldn’t mix cocktails with it. 42 proof. B+ / $15 [BUY IT NOW FROM DRIZLY]

Tempus Fugit Creme de Noyaux – Creme de Noyaux is a French take on amaretto, made from apricot and cherry pits, bitter almonds, and spices, colored bright red with cochineal. Tempus Fugit’s version is made in Switzerland, and it’s one of a very small number of brands you’ll find on the market. Like Luxardo, there’s a distinct fruitiness on the nose here, with sweet marzipan notes vying for position. It’s engaging and moderated in sweetness, but the fruit, particularly those cherry notes, really dominates on the tongue, drowning out the almond character. At its higher abv, the finish offers a surprising medicinal quality, driven in part by its herbal components. This is something to have on hand for old-timey cocktail recipes, but amaretto tends to work better most of the time. 60 proof. B / $43 [BUY IT NOW FROM DRIZLY]

Regency Amaretto da Vinci – Reportedly made in Italy but bottled in New Jersey, from both almonds and apricots. Fairly mild, di Vinci is actually a bit fruity on the nose, showing apricot and mint notes alongside a gentle almond element. On the palate, the almond flavor kicks in for a few seconds, then rapidly fades away, lingering quietly in the background. It’s much less sweet than most amaretto, which is surprising, with hints of chocolate and mint evident on the finish. Not bad, but its best feature is the price tag. 56 proof. B / $10 [BUY IT NOW FROM DRIZLY]

Bepi Tosolini Saliza Amaretto Veneziano – Italian, made from real almonds, infused with brandy. It’s pure marzipan on the nose, but the palate takes a sharp turn, turning boldly chocolatey and offering a more brooding and aggressive roasted nut composition. It’s almost more hazelnut than almond, with an ample vanilla character and a lengthy, moderately sweet finish. Its unconventionality is fine for an after-dinner liqueur, but it’s ultimately a bit of an outlier as amaretti go. I’d almost use this in lieu of creme de cacao instead of amaretto. 56 proof. B / $34 [BUY IT NOW FROM DRIZLY] [BUY IT NOW FROM CASKERS] 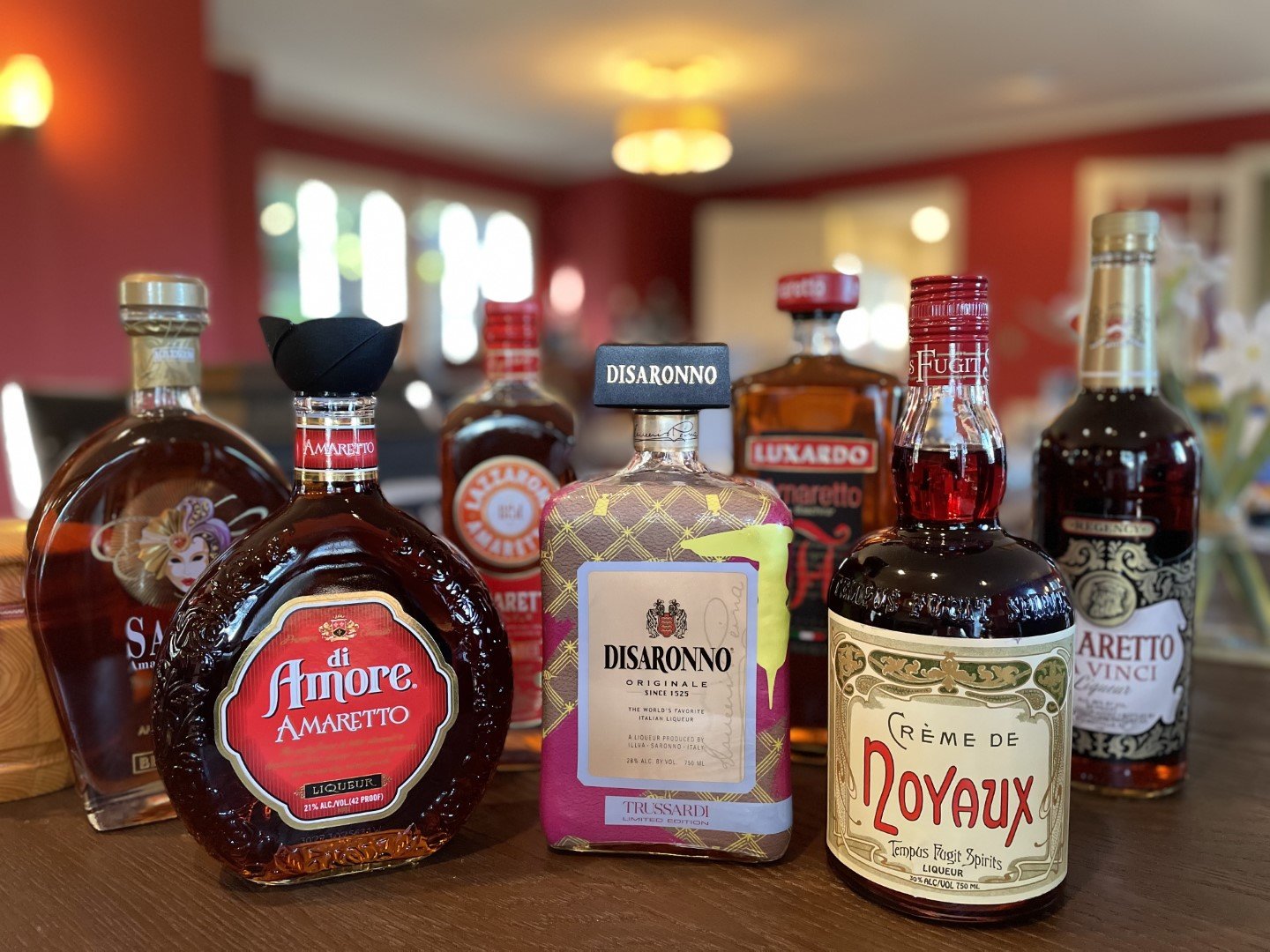