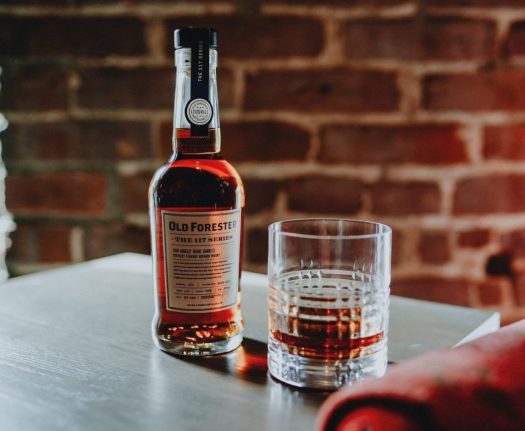 Old Forester’s latest whiskey has a unique claim to fame: It’s the first whiskey from the brand (or Brown-Forman in general) to feature a woman’s signature on the label. That woman, of course, is Jackie Zykan, Old Forester’s Master Taster and a veteran of its sister brand, Woodford Reserve.

Zykan’s autograph can be found on the first expression from a new line of whiskeys from OldFo called The 117 Series, which will be directed by Zykan over the course of the series’ releases to come. As for the inaugural bottling, here’s the details, plus some added context from Zykan:

The 117 Series: High Angels’ Share showcases a selection of barrels which lost exceptional volume to evaporation in the aging process, resulting in a bourbon that is rich and multidimensional, layered with dark flavor notes, dried fruits and unexpected herbaceous  qualities. Given the dense concentration of flavors in the liquid, air, water or an ice cube allow this whisky to open and unveil unorthodox character. This release examines the unfettered qualities presented in low-yield barrels, showing Old Forester consumers an unencumbered look at this specific facet of the ageing process. This singular release is presented at 110 proof.

The 117 Series is a testament to Old Forester’s continued endeavors in product innovation and experimentation and allows for consumers to try a wide range of Old Forester’s flavor profiles. From controlling the mash and yeast strain, to barrels and maturation environments, the possibilities are limitless. Subsequent releases in The 117 Series may explore selections from specific warehouses, barrel manipulations, deconstructed blends and more.

“Creating The 117 Series has been a labor of love and seeing my signature on the label is one of the highlights of my career. My mind is exploding with the endless possibilities of this smaller scale of experimentation and innovation,” said Jackie Zykan. “This series presents an opportunity to pull the curtain back and share the isolates of the blending process to help deepen the understanding of how variants in maturation affect flavor profile. We’re playing in uncharted territory here and those who love Old Forester like we do will have the chance to explore with us.”

The name pays homage to the location of Old Forester’s homeplace along the famed Whiskey Row on Main Street in Louisville. Old Forester also called this location home from 1882 – 1919, returning in 2018 with a fully-functioning distillery and tour experience giving guests an immersion into the brand’s rich history and contemporary innovations.

The nose is, well, curious. It doesn’t immediately remind me of Old Forester, which tends to be on the aggressively aromatic side. Instead, softer notes of sesame seed, maraschino cherry, and mint are a bit at odds on the nose with the clearly high alcohol level, which tends to wash out the experience with a punch of booziness. The overall impression is one of austerity, a beefy toughness soon arriving with a significant savoriness in tow. The aromatic experience on the whole is quite flat.

The palate brightens things up, showing a more traditional caramel and vanilla attack, at least at first. As it develops in the glass, the peppery whiskey remains quite beefy and savory, crying out for some sweetness as that initial caramel hit quickly fades away. While a bit nutty and gently winey on the finish, the whole affair never dazzles in the way that some recent Old Forester bottlings have, the whiskey coming across as rather anonymous.

While this one’s a bit lackluster, I’m looking forward to see what future 117 Series releases bring.