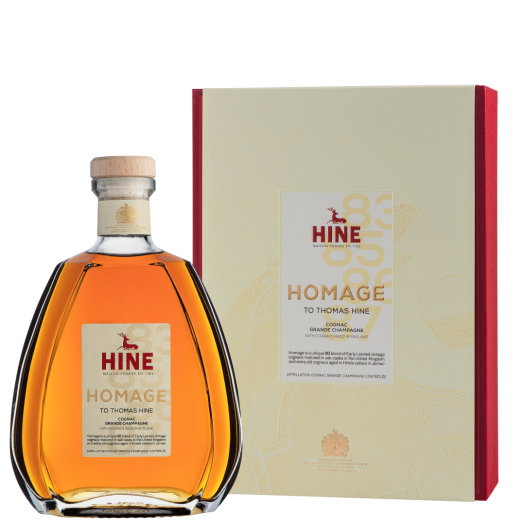 Hine’s Homage is an homage to Thomas Hine, the English founder of the Hine brand back in 1763. The brandy itself is a Grand Champagne Cognac blended from more than 20 eaux-de-vie, again all made from Grande Champagne grapes. This blend is noteworthy as including four single vintages that are called “Early Landed,” which were “aged in damp British cellars until reaching full maturity.” We reviewed a previous (but slightly different) version of the brandy in 2018.

The Cognac is one of the brand’s quieter expressions on the whole. Fresh and floral on the nose, it offers a straightforward character of incense, potpourri, and some spicy tobacco notes. Over time, some pepper finds its way into the mix, but it’s lighthanded to be sure.

The palate isn’t overly sweet, with straightforward chocolate notes followed by some mild strawberry and cream character. Quite dry as it develops, the finish makes its way toward a more floral character, though over time the strawberry plus some raspberry notes begin to dominate. A bit of milk chocolate completes the picture, one which shows a youthful but lively charm and a decided lack of austerity. If you like your Cognac old, rich, and hoary, Homage won’t fit the bill. Fans of a much lighter, more elegant style of brandy should love it.