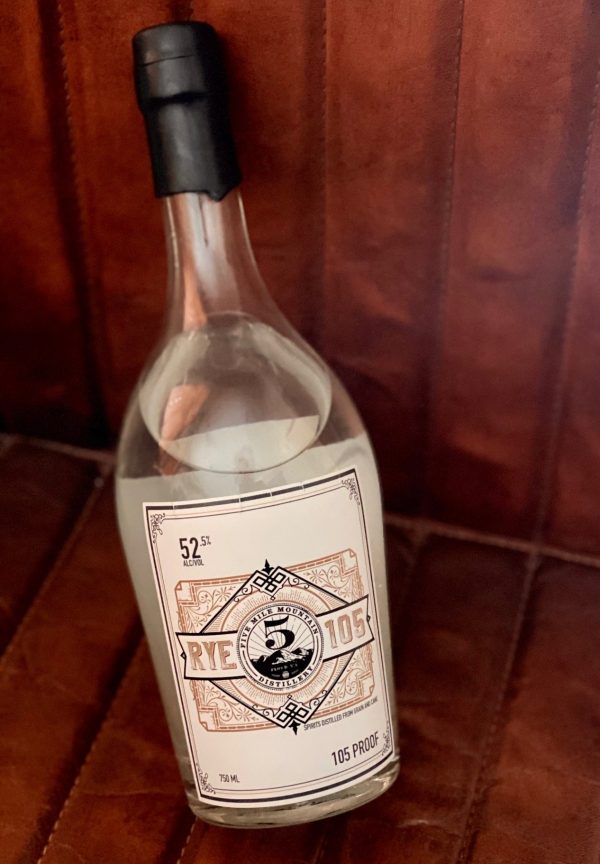 The hip little mountain town of Floyd, Virginia (famous for the annual FloydFest music festival) has a storied moonshining history. It sits next to Franklin County, dubbed “the moonshine capital of the world,” but according to the owners of Five Mile Mountain Distillery, Floyd was actually the larger producer during Prohibition. The distillery even gets its name from the famous hilltop that was home to the most well-known illicit stills. Naturally moonshine, or Blue Ridge Mountain shine as they call it, is a prominent feature of their lineup, but they also offer an aged and unaged rye whiskey, Rye 105. While clear whiskey doesn’t tend to be big seller for a lot of craft distilleries, it’s a great way for curious consumers to see where a craft distillery is heading. So, let’s see what Rye 105 can tell us about Five Mile Mountain.

The nose shows a lot less alcohol than I would expect from new make at this proof, and there’s less of the vegetal and grassy notes that you would anticipate in a newborn rye whiskey. It’s warm and only mildly sweet with notes of yeast bread, pie spice, and a bit of peppered bacon. That savory quality carries through on the palate, which is oily with a gentle heat. Notes of sea salt, camphor, chocolate mint, and crusty rye bread evidence a unique complexity. Time in the barrel could really elevate this one with some needed sweetness, but as it is, Rye 105 shows plenty of promise.