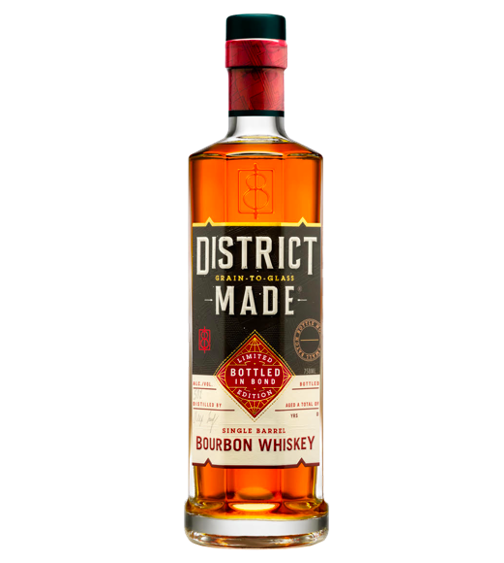 Washington, D.C.’s One Eight Distilling has released a steady stream of very limited editions over the last year or so. We already took a look at their impressive single barrel cask strength rye, but their Bottled in Bond Rye sold out last spring before we could even get our hands on it. Fortunately, the good whiskey-makers in our Nation’s capital hooked us up with a sample of their latest very rare (one barrel’s worth) single barrel release, District Made Bottled in Bond Bourbon. It’s important to point out that this is not merely an older version of their standard District Made Bourbon, which relies on a unique four grain mashbill that blends wheated and high rye bourbons. This bourbon is that high rye mashbill only, made from a recipe of 59% corn, 24% rye, and 17% malted rye. Presumably, since it was aged for a full five years, this whiskey came from one of One Eight’s earliest distilling runs. It was apparently just too good to blend, and thus became the very first bottled in bond bourbon to hail from Washington, D.C. Thoughts follow.

The nose is soft and sweet with notes of malted grain and polished wood. As it opens, the baking spice builds, accented with brûléed sugar, chocolate sponge cake, and a tart cherry note. The palate is big and spicy with brown sugar, pipe tobacco, and spearmint. It’s somewhat light-bodied on the tongue and a touch hot, but those flavors are still bold enough to stand out. A few drops of water really does wonders to soften the edges on this one, bringing out more butterscotch and baking spice and adding a silky, fudge sauce quality to the finish. The distillery’s flagship District Made Bourbon is slightly more balanced and approachable, but this is definitely a fun and flavorful whiskey.

One Eight Distilling District Made Bottled in Bond Bourbon Whiskey