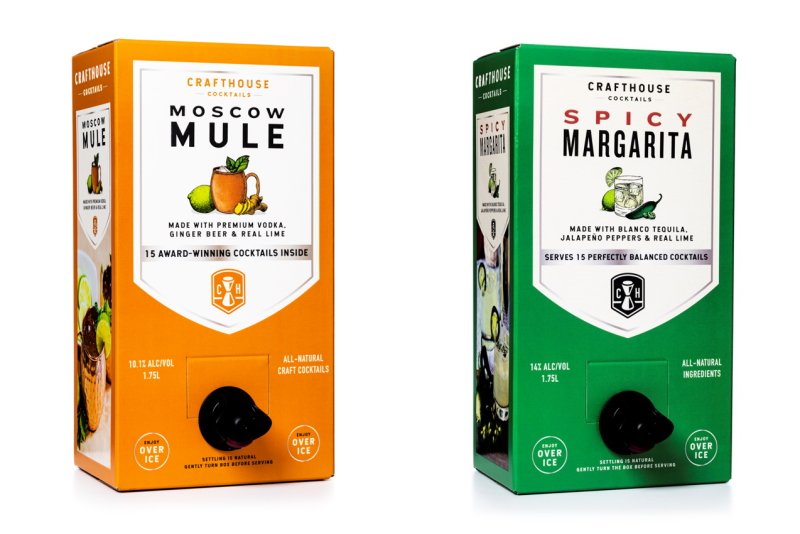 It’s a sign that pre-prepared cocktails have truly arrived that every one of Crafthouse Cocktails’ eight ready-mixed cocktails won Double Gold, Gold or Silver at the 2020 San Francisco World Spirits Competition. The company is the brainchild of Chicago bar owner and restauranteur Matt Lindner and Global Bartending Champion Charles Joly.

Joly had become used to his regular customers calling him and asking him to fix the cocktails they were trying to make at home, but which weren’t coming out right. He would talk them through it over the phone, and along with his friend and business colleague Lindner, decided to look into making small batches of ready-made cocktails that they could bottle for people for parties. Crafthouse’s serious of cocktails are now available in a boxes, bottles, and aluminum cans.

Joly’s cocktails ought to be good, as for the last few years he’s been making signature cocktails for both the Oscars and the Emmys. For Crafthouse he takes the same approach – that you need to source the best ingredients, pay attention to detail, and use no artificial flavors or additives. Both cocktails come in recyclable 1.75 liter boxes, providing 15 cocktails per box.

Crafthouse Cocktails Spicy Margarita – This is as good a Spicy Margarita as you’ll get, in or out of a box. On the nose there’s the slight triple sec sweetness you expect from a regular margarita, and the earthiness of the 100% blue agave tequila used. Layered over that is the lime, the spiciness of jalapeno peppers, and a mezcal-like smokiness. On the palate the spiciness naturally dominates but with some smoky chipotle, a fresh lime zestiness, and an underlying sweetness. The finish rounds off with the satisfying spice that inspires the drink. 28 proof. A / $28 (1.75 liters)

Crafthouse Cocktails Moscow Mule – Crafthouse makes its own ginger beer and sources a premium vodka as the basis for its Moscow Mule. They don’t identify the vodka but were confident enough to send along a tasting sample of the vodka on its own, and it was impressive. For a Moscow Mule, you typically expect the spicy ginger to hit you on the nose — sometimes literally — and it does so here, though it’s perfectly countered by fresh lime. It’s the same on the palate, but with more lime than a conventional Moscow Mule, and it works perfectly with a palate that is both spicy and creamy. Poured over ice with a mint sprig, it was faultless, and breathed new life into my expectations of the standard Moscow Mule. It works out at less than $2 a serving. 20.2 proof. A / $28 (1.75 liters) [BUY IT NOW FROM DRIZLY]