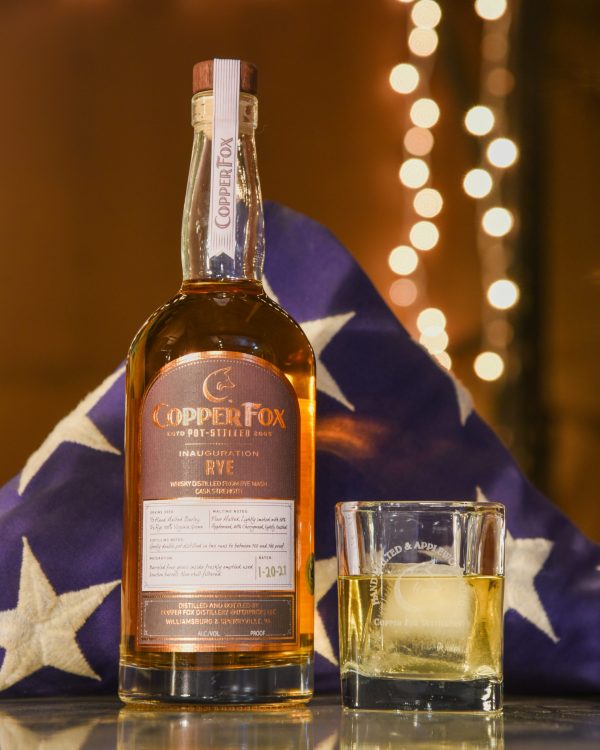 A handful of craft distillers across the country commemorated the recent presidential inauguration with a special spirits release. Virginia’s Copper Fox Distillery used the moment as an excuse to release its first ever cask strength whisky, dubbed Inauguration Rye. While this is the distillery’s first inauguration release, going forward there are plans to set aside barrels for every future inauguration to be bottled after four or eight years. The whisky is their standard rye recipe of 2/3 Virginia-grown rye and 1/3 malted barley, uniquely hand malted with local apple and cherrywood. Only two barrels were put down to age on January 20, 2017. At exactly four years old, it marks one of the older whisky releases from the distillery, which prides itself on achieving a target profile at a comparatively younger age than many producers. Besides being the distillery’s first ever cask strength release, this whisky also did not undergo Copper Fox’s traditional “chipping” process in which toasted fruitwood is added to the barrel to impart flavor and color. Thoughts follow.

First things first, it is immediately clear that Copper Fox’s chipping process really does add considerable color to their whiskies, which are almost all aged in ex-bourbon casks. The absence of that technique in this whisky gives it the appearance of a young Scotch with a bright golden hue. At a potent cask strength, there’s plenty of alcohol in the initial nosing, but there’s also a surprising complexity amid all the heat. A gentle note of pipe smoke smolders throughout the aroma, but it’s also bright and a touch creamy with notes of toasted marshmallow, crunchy ginger snaps, and dried apples. On the palate it’s light and earthy but still lush and sweet, exploding with intense rye spice – dusty clove and cardamom – but also a rich, honeyed quality. Notes of ripe green apple and butterscotch candies are balanced against sweet tobacco and a bit of cigar ash. The finish is long and warming with more orchard fruit, vanilla bean, and candied ginger.

A true grain-to-glass rye whisky produced in Scottish tradition with fruitwood smoked barley and served up at natural cask strength? The craft spirits world has delivered no shortage of unique whiskeys in recent years, but you would be hard-pressed to find one quite like this or quite this good.