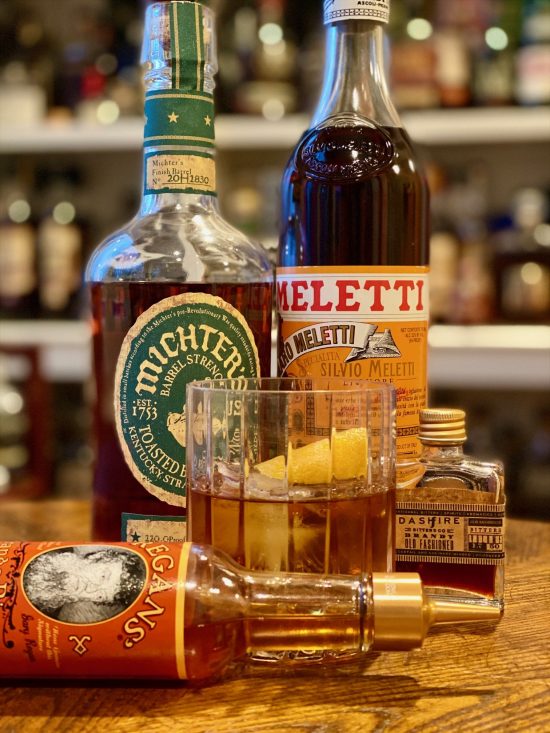 I’m always on the lookout for a new Manhattan recipe, and I love to experiment with all of the different amari that have started flooding our shores in recent years. Recently, I stumbled on a version of this cocktail, dubbed The Mancini, that was created by Greg Seider and named for a friend of his whose family was from the Italian town where Meletti amaro is made. Years ago, we reviewed Meletti’s 1877 Bitter Aperitivo, the company’s much less bitter take on amari like Fernet and Campari, but we haven’t yet reviewed their namesake amaro. (Stay tuned!)

Anyway, standard Meletti is the key ingredient in Seider’s creation, and it’s just too good to not use at least .75 oz. of the stuff. Go a full ounce if you like your cocktails rich and sweet. The smoked cinnamon bitters proved a challenge to find or make at home, so to compensate, I had to put a distinct spin on his creation, something I encourage all home bartenders to try every now and then. Dashfire’s Old Fashioned Brandy bitters are packed full of cinnamon, plus plenty of other big baking spice notes, and to add a little smoke to the equation, I pulled a bit of a cocktail Hail Mary by using Michter’s limited release Toasted Barrel Finish Rye. Michter’s superfans will have to forgive me for mixing with this one. The resulting cocktail is heavy on sweet chocolate and citrus notes balanced well against exotic elements like saffron, which linger on the palate after the sweetness fades. The smoke is still not really there, but I think I’m onto something with this one. Try it at home and let me know your thoughts!

Combine all ingredients in a mixing glass and stir until well-chilled. Strain over ice into a rocks glass and garnish with a flamed orange peel.