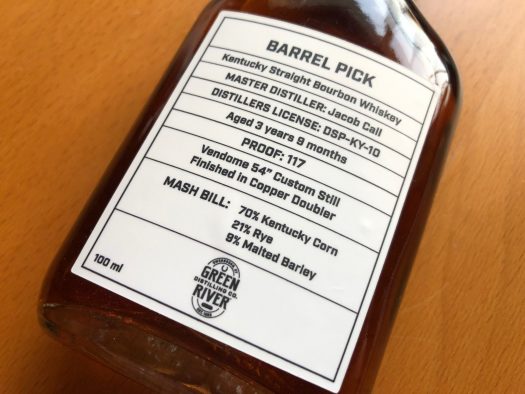 Owensboro, Kentucky’s O.Z. Tyler Distillery, which got started producing spirits in 2016, is returning to the original name of the distillery that houses its operations: Green River Distilling Co., a brand which was originally founded in 1885 by John W. McCulloch, and was apparently a big deal back in the day.

“Green River was known for making some of the finest whiskey in Kentucky. We’re excited to be crafting bourbon and rye under the Green River flag again,” said Jacob Call, Master Distiller of Green River Distilling Co. “As a third-generation distiller and seventh-generation Kentuckian, playing a role in reviving this historic distillery has been a once-in-a-lifetime experience.”

CEO Simon Burch worked closely with John’s great-grandson Rob McCulloch to rename the distillery. McCulloch said, “I’ve always wanted the distillery’s name back at its original location in Owensboro. It completes the story my great-grandfather started in 1885.”

The first product to bear the Green River name will be a Kentucky Straight Bourbon that’s 4 years old, made from a mash of 70% corn, 21% rye, and 9% malted barley. It’s slated to come out later this year, but while we wait, we got a sneak peek at the almost finished product, a cask strength barrel pick pulled by Call at 3 years, 9 months old.

Keeping in mind this isn’t a finished product — there’s not even a label yet — let’s give the almost ready Green River Bourbon a try to see how things are shaping up.

Turns out: Everything’s pretty much on the right course, with some unique elements offering quite a surprise here and there that elevates this whiskey in unexpected ways. The nose is boldly nutty and leathery, almost evoking a Pedro Ximenez sherry character, studded with spices that run to cloves and nutmeg. At full strength the palate is bold and evocative, with lots of chocolate and vanilla, touched by slightly smoky barrel char. There’s plenty of fruit though, to balance out the more savory elements, with notes of red apple, plum, and some citrus all in a juicy swirl. Never mind the water, though if you add a splash you’ll find notes of tea leaf and some tamarind in the mix. The finish has a reprise of cloves, plus a hint of menthol, bringing things back into a more austere focus — and a lovely, immersive balance.

This pre-release sample may very well be drawn from the honeyest of honey barrels — if so, I apologize that you won’t be able to taste it — but as it stands I like where things are going.