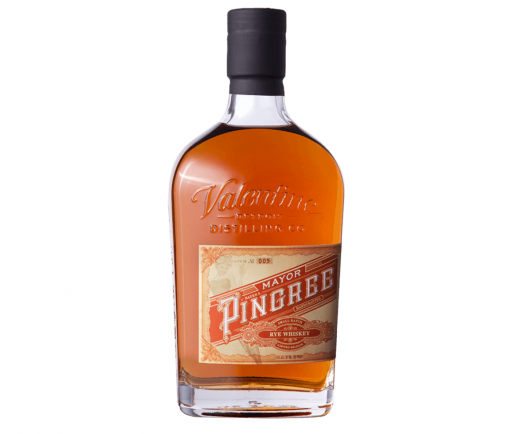 We know Michigan-based Valentine Distilling best for its eponymous vodka, but  the company also produces gin and a number of whiskeys, two of which we review here. What’s in these bottles of “Old Ping,” named after a beloved Detroit mayor who served in the 1890s? We’ll describe each in turn.

Mayor Pingree Rye Whiskey (Orange Label) – This rye is a blend of MGP rye and Valentine’s own triple pot-distilled rye, made in Ferndale, Michigan. While it doesn’t carry an age statement, the company says it is at least four years old. While rather youthful and beefy on the nose, this rye is surprisingly engaging, offering aromas of brown butter, licorice, and a savory, oaky gunpowder character. Some cherry notes provide some fruitiness, but filtered through a touch of medicinality. On the palate, the whiskey feels a bit gritty up front, with more cherry (and cherry wood) notes emerging shortly. Butterscotch elements provide sweetness, but a smoldering note of hickory embers toughens things up as the finish arrives. Some tarry tobacco notes and a bit of greenness once again evoke more of a youthful character. 94 proof. Reviewed: Batch #013. B / $36

Mayor Pingree Bourbon Whiskey 13 Years Old (Black Label) (2020) – This is the fifth edition of Pingree’s “Black Label” Bourbon, which is produced in very limited quantities as a different blend every year and bottled at cask strength. It’s completely composed of MGP stock (though largely aged in Michigan), this 2020 bourbon being comprised of 10 casks of 13- and 14-year old whiskey, making it (by far) the oldest Pingree yet. Bold and peppery on the nose, this bourbon pulls no punches — as one would hope at this abv and age level. Spicy with ample dill and green grass notes, the immersive aroma takes you in to a palate that’s infused with caramel and butterscotch. Notes of mint and lemon give it an immediate vitality, almost coming across as summery in its freshness. Exuberant at full strength, water helps to temper some of the heat and lets a rye-heavy character show through more clearly, with dill, eucalyptus, and a bright note of Maraska cherry on the conclusion. The whiskey is never short of delightful, but take my advice and don’t skip a splash of water. 123 proof. Reviewed: Batch #5. 1001 bottles produced. A / $300