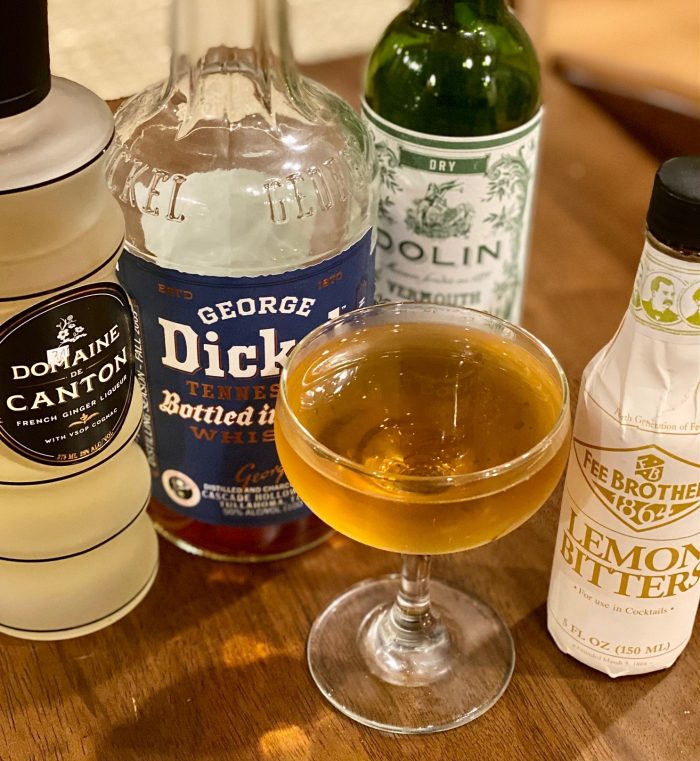 You may have missed the news last fall that Jack Daniel’s (specifically the Old No. 7 expression) was named the #1 selling whiskey in the world. Not just American whiskey. All whiskey. Period. So, way-to-go America! Of course, the great US of A is not without its quirks, one of which is that Jack can’t be purchased or tasted at a bar (outside of the distillery) because Lynchburg is in a dry county. Go figure.

The Dry County Cocktail is named for that bit of irony. It’s the creation of San Francisco mixologist Jonny Raglin and supposedly inspired by his friend’s father, who used to prefer a dry Manhattan made with Tennessee whiskey. The Tennessee whiskey that forms the base of this cocktail, however, is not the uber popular Old No. 7 brand, but the more cocktail friendly George Dickel (which also happens to be the second most popular Tennessee whiskey, at the moment). For what it’s worth, Dickel was also produced in a dry county until 2012. While the original recipe calls for Dickel No. 12, which is entirely serviceable, the new Bottled in Bond is older and a touch higher proof, making it a better cocktail companion, in my opinion. Hopefully, Jonny would agree.

Anyway, since this is a dry Manhattan, the Dry County Cocktail comes across much less sweet with the Dolin replacing some of the maple syrup notes in the whiskey with a crisp, herbal edge. The Domaine de Canton ginger liqueur reintroduces a brighter sweetness, complimented by the lemon bitters, while also adding a silky texture to the drink. If you’re looking for a lighter Manhattan without the winey, fruit heavy profile of the classic style, it’s hard to go wrong with this one. Just don’t expect to find it at a bar in Lynchburg. Because there aren’t any.

Stir over ice and strain into a chilled coupe. Garnish with a lemon twist.