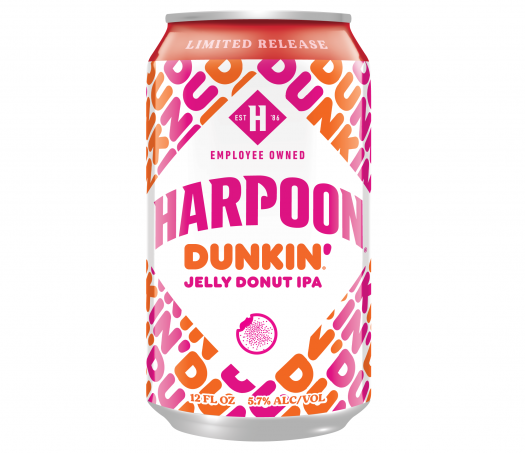 Harpoon made waves in 2018 with its solid Coffee Porter collaboration with, of all brands, Dunkin’ (nee Donuts). At the tail end of 2020 it came out swinging with four more brews (well, three plus a reissue), part of a “Dunkin’ Dozen” case, all inspired by Dunkin’ stuff — and not necessarily its coffee — and including actual Dunkin’ products in the brew. Well, let’s see what’s brewing up in Boston these days with a look at the quartet…

Harpoon Dunkin’ Jelly Donut IPA – While brightly fruity on the nose with a strawberry jam aromatic component, the IPA’s funkier elements quickly come into focus, creating a rare dissonance I didn’t think would be possible. Notes of forest floor pair badly with flavors of grandma’s perfume and melted Jolly Ranchers — and then there’s the muddy finish, which comes across like you’re chewing on wet tree bark. Suffice it to say I’ve never encountered a jelly donut that lands anywhere in this vicinity of flavors — nor, really, an IPA for that matter. 5.3% abv. D

Harpoon Dunkin’ Boston Kreme – A spin on stout, this chocolate-heavy brew has the most clearly donut-like composition in the mix, with a creamy milk chocolate bar note set up from the start. Gently fizzy with light overtones of red wine, crushed walnuts, and vanilla, it’s sweet up front and more savory on the back end — able to thread the needle of balance such that it doesn’t become overtly dessert-like. 4.3% abv. A-

Harpoon Dunkin’ Pumpkin – Made with real pumpkin puree, this isn’t a seasonal I gravitate to, but which surprised me with its general drinkability. Plenty of holiday spice kicks things off here, with a gourd-like savoriness lead the way to a malty, slightly creamy back end. I’d stop at one, but I’d finish it. 5.2% abv. B+

Harpoon Dunkin’ Coffee Porter (2020) – Though I’m tasting it from can instead of bottle this time around, this reissue hasn’t changed notably, offering a fairly fizzy construction with a clear coffee character. That gentle fruit and wine quality are bolder on the finish, which takes on more of a chocolate character, studded with walnuts. Still fun. 6% abv. B+