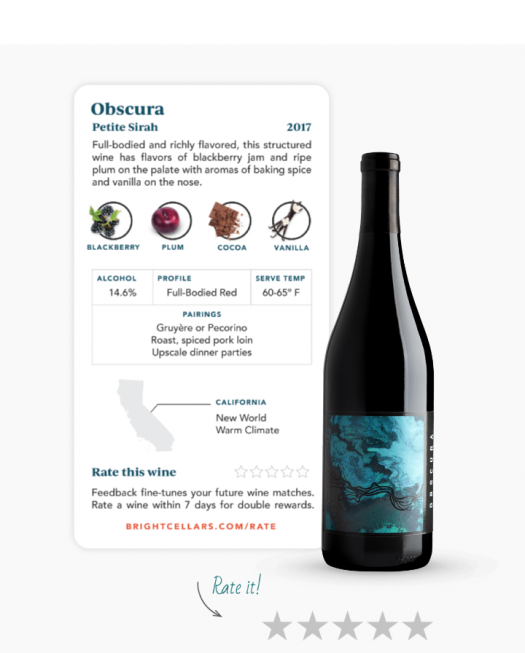 With an overabundance of subscription services of all sorts being delivered to mailboxes and front porches, standing out and earning a loyal customer base in a crowded market can prove challenging to even the most stout-hearted of operations. So it should come as no surprise that the wine world is saturated with services promising to find wine enthusiasts the best bottles on the market. Bright Cellars takes a unique approach on this assumption, insisting users take a detailed quiz based on personal taste preferences before the first shipment arrives. For $90 a month, six new wines are subsequently delivered for your consideration. As you enter your reviews, ratings and preferences on their well designed website and dashboards, the suggestion engine responds and refines future shipments.

After entering our preferences (as a baseline: big fan of Malbec and Cabernet), we received six wines — all obscurities that are not widely available, many of which are likely private label offerings — to find out if their dedication to metadata and detail rings true.

2016 Nihilist Wine Co. Cabernet Sauvignon – A lovely blend of dark berries and plum throughout, giving way to oak towards the end of the palate in a Cabernet that is medium-bodied and elegantly understated fashion. Not sure which branch of nihilist philosophy this falls under, but it’s certainly one at odds with the texts and lectures I experienced in undergrad. This runs more along the lines of Transcendentalism, showing the very best of nature’s potential. This was the first of the subscription I opened, and set the bar quite high for everything thereafter. A- / $30

2019 Jetbird Malbec – This Northern California-based Malbec is heavy on ripe raspberries and cherries up front, with secondary notes of vanilla and baking spices towards the finish. A very full-bodied offering that is a bit higher in alcohol, but never lets on as such, and is probably the closest to the center of the Venn diagram of value and quality. B+ / $23

2019 Obscura Petit Verdot – Incredibly fruit forward on the nose, with generous notes of black cherry and almond blending together in a style reminiscent of a freshly baked breakfast pastry. Notes of blackberry and faint plum preserve on the palate with a finish that doesn’t wear out its welcome. The blackberry most certainly lingers the longest, but that’s rarely a bad circumstance to encounter. B+ / $25

2019 Bushtelly Shiraz – When dropping a line over the holiday season, I was told by a friend from Perth that “bushtelly” is slang for hanging around a campfire with friends. Fitting, as this shiraz is the smokiest of the group, but is never overpowering in a manner which ruins the experience. Fruitier elements of plum, mild pepper, and blackberry come along later towards the finish. B / $25

2019 Tag & Title Zweigelt – The curveball of the box, Zweigelt is one of the flagship grapes of Austria and Hungary; so revered it is mentioned in Hungary’s national anthem. Quite heavy on star anise and cherry, but some time in the glass mutes things favorably. Incredibly lively, and the full-flavored raspberry rounds things out with continued vitality. B / $25

2019 Voyage dans le Vent Cabernet Sauvignon – Medium to full bodied, heavy on notes of leather and strawberry jam. A little bit of dark chocolate towards the end, but everything runs together endlessly and feels like a party guest who refuses to leave at night’s end. Given my love for the other Cabernet included in the box, this surprisingly missed the mark. C / $24

Overall, Bright Cellars presents a respectable showing, with only one bottle truly missing its mark. Even then, it would not be a bottle where I would recoil in horror at being presented with at a dinner party or restaurant, should I ever return to such environments. I would be most curious to see the refinement of the search engine suggestions after the inaugural round.

The price point and attention to detail Bright Cellars provides is worth the value, giving the overall experience a step up in its final rating. Much to their credit, the company’s customer service is helpful, never pushy and never trying to bend your tastes to their will. There is a definite advantage in bringing the personal preference into play over visiting a shop where the service may be less than stellar, incentivized on cases sold or what’s on sale, or callous in its customer service. The long-term benefits and a personal refinement are a mystery yet to be resolved, but the first round was impressive. 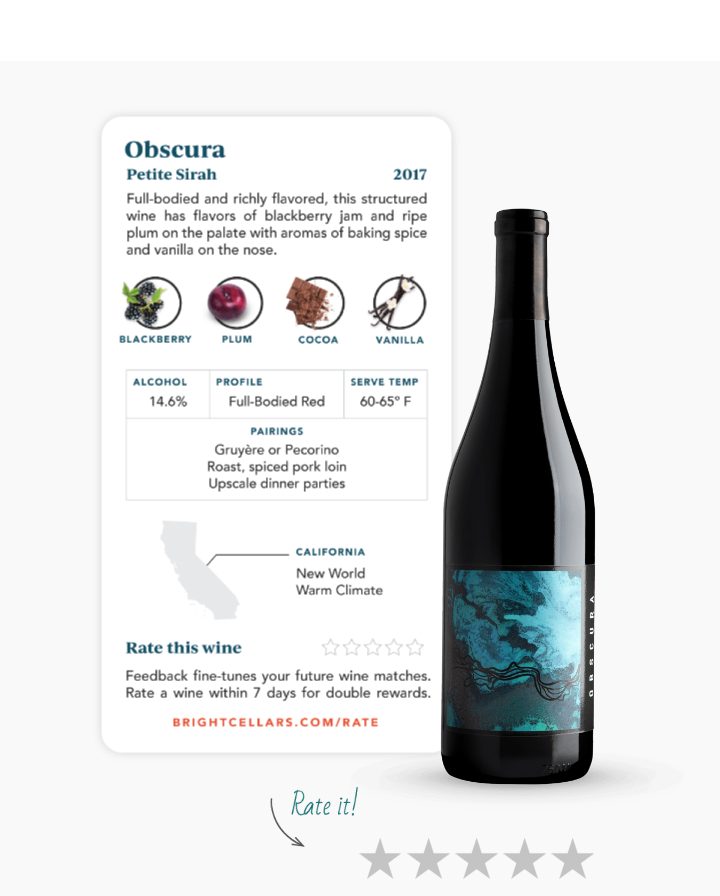