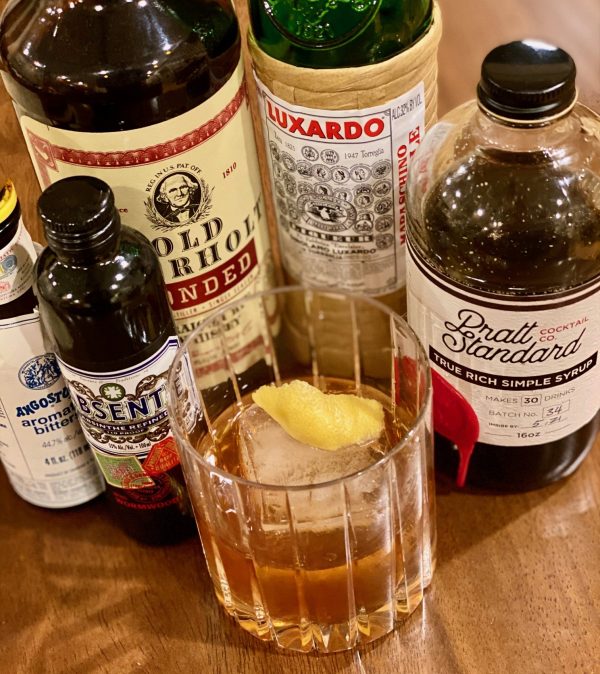 Digging through older cocktail books, you may have come across a recipe with the rather uncreative title of Improved Whiskey Cocktail. While the name leaves a lot to the imagination, the cocktail itself is as classic as they get, created by Jerry Thomas, the founder of American mixology, way back in 1876 when Ulysses S. Grant was president. What makes it improved, you ask? Well, Jerry’s first Bartender’s Guide in 1862 offered up the original Whiskey Cocktail, the forefather of the beloved Old Fashioned, which was comprised of whiskey, simple syrup, and bitters. This “improved” version includes a bit of European influence with the addition of maraschino liqueur and absinthe, leading many booze historians to consider it the forebearer to the Manhattan and the Sazerac. Like I said, as classic as it gets.

Some recipes add a dash of absinthe, but I prefer to go the Sazerac route with a whisper thin rinse of the stuff. It really makes for a nice aroma with the anise contrasting the maraschino and rye spice in the whiskey. The palate is sweet, like a lot of the true classics, but the addition of a rich simple syrup (can’t go wrong with Pratt Standard) adds another level of brown sugar richness, which I find complements the whiskey well. It really does come across like an Old Fashioned/Sazerac hybrid. It’s at once bright and sweet, herbal and fruity. A damn good drink, but also a fun look into the origins of American cocktail-making.