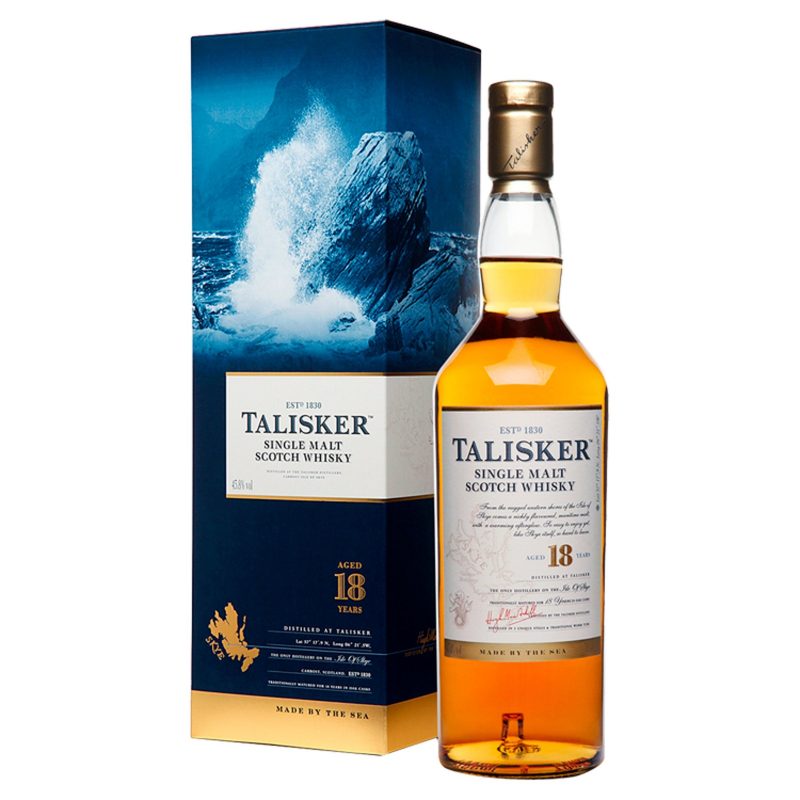 Talisker single malt can be enjoyed in a variety of expressions, from a smattering of no-age-stated offerings, including the annual Distiller’s Edition, to the occasional Diageo, end-of-year limited edition offerings we see from time to time. The core age-stated range is small, but beefy, with the much-loved 10 year, a 25 year, and this bottle squarely in the middle, Talisker 18 Years Old. For our money, Talisker 10 outshines most, if not all, of its NAS brethren and quite a few other well-regarded single malts, for that matter. What then to make of this more mature Tali?

Like its little brother, this one is aged in a mix of ex-bourbon and ex-sherry casks, but it undergoes almost twice the maturation time. On the nose, the smoke has been subdued from the already modestly peaty 10 year old, leaving behind a lovely layer of sweet chimney soot and cigar wrapper suspended alongside rich caramel, Biscoff cookies, and subtle orange peel. On the palate, there’s still a bit of orchard fruit but stewed, spiced, and sweetened into a rather decadent pie filling. The coastal qualities in the 10 year old have been almost entirely transcended, but a persistent bit of salty ocean spray keeps the island quality alive. Honey, cinnamon, and sweet biscuits round out its rich profile and linger on an ample, silky finish accented by a kiss of slightly briny campfire smoke. Beautiful stuff.