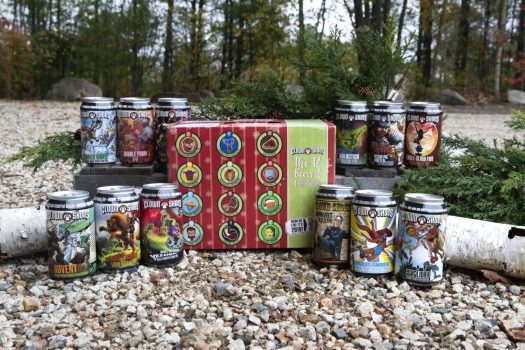 Our friends at Clown Shoes (a subsidiary of Boston’s Harpoon) have dropped a mixed case of brews (a dozen 12 oz cans), featuring 12 different offerings from their collection — including a number of expressions that are exclusive to this case. Here’s a quick look at all of the beers in the holiday pack — which you should not have any trouble finding on the market for a few weeks to come.

Clown Shoes Space Cake Double IPA – This classic DIPA, brewed with Mosaic and Citra hops, pours on citrus and resinous pine flavors but never strikes the palate as overly, bluntly hoppy. That works to its favor, though the beer feels just a touch on the sweet side, with a finish that slowly fades from notes of nougat to a gentle, rolling bitterness. 9% abv. A-

Clown Shoes Pecan Pie Porter – This porter is brewed with natural pecan flavors in the mix, making for a nicely sweet and nutty twist on the standby. Up front, there’s lots of malt and those wine-heavy notes that tend to carry the typical porter, but as the palate develops a sweet caramel and clear pecan note emerge. The “pecan pie” element is even more evident on the nose, right when you crack open the can, where a boldly fragrant aroma of spiced nuts and brown sugar waft through the room. 8% abv. B+

Clown Shoes Double Dry Hopped YeeeHaaw! New England Style IPA – A bold hazy, made with Citra, Azacca, and Mosaic hops, wheat, and flaked oats. Beautifully tropical, with notes of pineapple and mango in near-equal proportion up front, this bittersweet beauty is balanced but complex, moving from its sweet attack into a smoldering back end which tempers the experience and brings it back into focus on the piney — but not particularly unctuous — hops. Yeee haw, indeed. 7% abv. A

Clown Shoes Reindeer Games Bavarian Style IPA – This red IPA (an exclusive for this case) offers a curious combination of malt and Saaz hops impregnating its rather light, fizzy, and easygoing body. The classic, nutty maltiness of a Bavarian brew is decidedly subdued thanks to the zippiness of the palate, which feels rather more appropriate to a seltzer than an IPA. 7% abv. B

Clown Shoes Advent Party Crasher American Imperial Stout – An exclusive to the 2020 mix pack, this “Advent” stout takes Clown Shoes’ standard cocoa-laden offering and impregnates it with mandarin orange flavor and orange peel to give it a distinctive holiday vibe. The orange element is pretty subtle, actually — it’s hard to stand up against the bold coffee bean and cocoa nib notes in the stout — though there’s a vague fruitiness evident midway to the finish. A hefty level of fizz throughout tends to make any nuance a bit elusive, though. 8% abv. B+

Clown Shoes Eagle Claw Fist India Pale Ale – One of Clown Shoes’ original IPAs, long since retired and briefly brought back for the holidays with a refreshed recipe. The black malt in the bill packs a punch, giving the palate a slightly gritty, gently charred character and a punch of spice to complement the more traditional resinous, piney hop character. If you prefer more earthy mushroom and less citrus in your IPA, this is the beer for you. 8% abv. A-

Clown Shoes One Man Holiday Belgian-Style Quadrupel Ale – This Belgian quad is a monster — not of hops but of syrupy malt, hitting the palate with an unctuous weight and an almost syrupy level of sweetness. Overwhelming with fruit but filtered through a haze of muddy funk, the outrageous level of malt here is simply too overwhelming for my palate — though with any quad, I realize, that is sort of the point. 8% abv. B-

Clown Shoes Hoppy Feet Black India Pale Ale – Clown Shoes’ very first beer is back for the holidays, and it’s easy to see why it was such a hit back in 2010. A rich hybrid of IPA and stout, the beer has the pungent funk of hops balanced with notes of coffee and cocoa powder that add a surprisingly savory layer to the brew. There’s no sweetness here in the slightest — and it feels like maybe it could use a little — with tons of lingering coffee ground notes on the enduring finish. 7% abv. B+

Clown Shoes Bubble Farm India Pale Ale – A classic American IPA made with Mosaic, Simcoe, Azacca, and Idaho 7 hops, this is a hop bomb that also has balance. Gently sweet, studded with orange peel, and showing vaguely tropical notes up front, the beer settles into a groove over time that slowly folds in notes of earthy forest floor. Pretty darn lovely from start to finish. 6.5% abv. A-

Clown Shoes Galactica Double IPA – A boldly and unapologetically resinous IPA (made with a combo of Galaxy, Citra, El Dorado, and Mandarina Hops), it’s layered with notes of orange peel and a hint of tea leaf. Rounded and soulful, it’s another iconic DIPA from the Clown Shoes crew. 8% abv. A-

Clown Shoes Chocolate Sombrero Mexican-Style Chocolate Stout – Cinnamon, vanilla, and ancho chiles give this chocolaty stout a Latin spin — but it’s less intense than you might expect, layering a gentle touch of spice — cinnamon being the most notable element — across the top of the chocolate-heavy, soulful brew. It’s all very festive and holiday friendly, with notes of coffee bean lingering well into the finish. 9% abv. A-

Clown Shoes Royal Standard Wee Heavy Ale – This wee heavy is aggressively malty and incredibly sweet, almost wine-like at times with its syrupy, very fruity palate that runs to notes of apricots, spice cake, and an herbal note on the finish. Unctuous and enveloping — and a bit much at times. 8% abv. B