Rated A Rated A- Rated B+ Reviews Wine 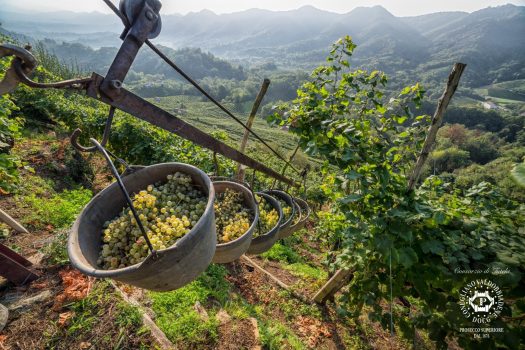 Conegliano Valdobbiadene is a small zone in Italy’s Veneto region, just 45 minutes from Venice in the province of Treviso.

The region is named because it lies between the towns of Conegliano and Valdobbiadene, and this is the heart of high-end Prosecco production in the country. The glera grape has been cultivated here for centuries, and today the Conegliano Valdobbiadene Prosecco Superiore DOCG specifies that wine can only come from 15 communes in the region: Conegliano, San Vendemiano, Colle Umberto, Vittorio Veneto, Tarzo, Cison di Valmarino, San Pietro di Feletto, Refrontolo, Susegana, Pieve di Soligo, Farra di Soligo, Follina, Miane, Vidor, and Valdobbiadene.

Prosecco is classified into four classifications based on sugar content. The fourth was recently added in 2019 – Extra Brut – the driest category of all. The categories run (from sweetest to driest): Dry, Extra Dry, Brut, Extra Brut. In a recent masterclass tasting organized by the Consorzio of Conegliano Valdobbiadene Prosecco Superiore and run by wine expert Elaine Chukan Brown, we tasted through four wines representing different regions of Conegliano Valdobbiadene and each of the four dryness classifications.

2019 Le Colture Prosecco Dry Cartizze Valdobbiadene DOCG – 23 grams/liter of sugar, from a steeply sloped, mountainous area in the Cartizze area. The wine — “Dry” being the sweetest style of Prosecco — is creamy and nutty, with a modest layer of sweetness that hits the palate with notes of honey and tahini. Pretty notes of pear and toasted brioche linger on the wine’s surprisingly mild body, as the sweetness quickly fades on the finish. Quite versatile. A- / $18

2019 Masottina Prosecco Extra Dry Le Rive di Ogliano Conegliano Valdobbiadene DOCG – 15.4 grams/liter of sugar, from a gently rolling vineyard in Rive di Ogliano (“R.D.O.”) in the far east of the region. Surprisingly acidic, with a strong saline bent, this again does not feel particularly sweet but it bursts all the same with tropical fruits and notes of fresh green apple. That salty character lingers well into the lengthy finish. A favorite in this lineup. A / $NA

2019 Marsuret Prosecco Brut Valdobbiadene Rive di Guia DOCG – 4 grams/liter of sugar, from a fairly steep and rolling vineyard with flat valley areas as well. The exceptional shift in dryness is quite palpable here, and this comes across with a cracker-crisp character that keeps the sense of fruit at bay. Notes of lemon and some apple are evident mainly on the drying, simple finish, though hints of saline peek through here. B+ / $16

2019 Adami Col Credas Prosecco Extra Brut Valdobbiadene Rive di Farra di Soligo DOCG – 4 grams/liter of sugar, from another mixed vineyard of moderately steep, almost wild hills. Technically this has the same amount of sugar as the above wine, though it is formally classified as extra brut. It’s extremely dry — coming across as drier than the Marsuret, again despite having the same sugar content — again quite cracker crisp and showing floral notes more than fruit. Clean and linen-like, and more subtle and nuanced than the Marsuret. A- / $23