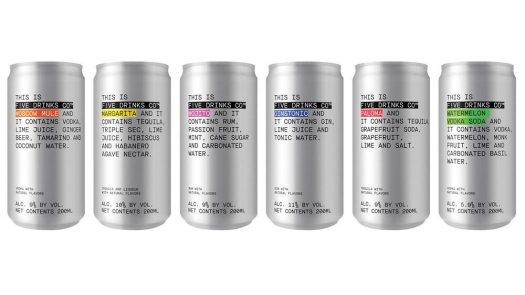 Five Drinks Co. (aka F!ve Drinks) is part of Bend, Oregon’s 10 Barrel Brewing, and it produces a range of ready-to-drink cocktails, all made from real ingredients and packaged in tiny 200ml silver cans. We received a set of four of its nine offerings (a variety of seasonals and collaborations produced with the famed bar Dante NYC are constantly being released). Thoughts on everything we tasted follow.

Five Drinks Gin & Tonic – Gin, tonic, lime. A classic but simple example of the style, with a burst of quinine and plenty of juniper-heavy gin up front. Lots of fizz helps to cut through the herbaceous qualities. The lime element here feels a bit heavy-handed though, and it doesn’t come across as 100% natural, particularly on the somewhat sour finish. It’ll pass well enough for the real thing in a pinch, though. 11% abv. B

Five Drinks Margarita – Made with tequila, triple sec, lime, hibiscus, habanero, and agave nectar. The hibiscus gives it a strongly pink hue, but don’t worry, the habanero is understated, offering a gentle companion to the lightly herbal tequila base. The orange and lime are nicely balanced with agave sweetness, but the finish has a vegetal note that feels just slightly off. 10% abv. A-

Five Drinks Paloma – Tequila, grapefruit soda, grapefruit, lime, and salt. The salt throws this for a bit of a loop, cutting the tart grapefruit not with sweetness but with saline, which doesn’t quite work. There’s also a strong kick of vanilla here — as if this was made with anejo tequila — that again spars oddly with the grapefruit soda base. The overall balance simply feels off. 9% abv. B-

Dante NYC & Five Drinks Summer Spritz – This collab contains gin, elderflower cordial, cucumber bitters, cucumber, lemon, and grape juice. The cucumber element is strong on the nose, while the gin and cukes blend harmoniously on the palate. If you like this green vegetable, this combo — lightly sweet with lemon and a hint of that flowery elderflower — will dazzle you, like a boozy spa water. Those not into “green juice” may find the fresh veggie notes off-putting. 12.5% abv. B+