Rated A- Rated B+ Reviews Wine 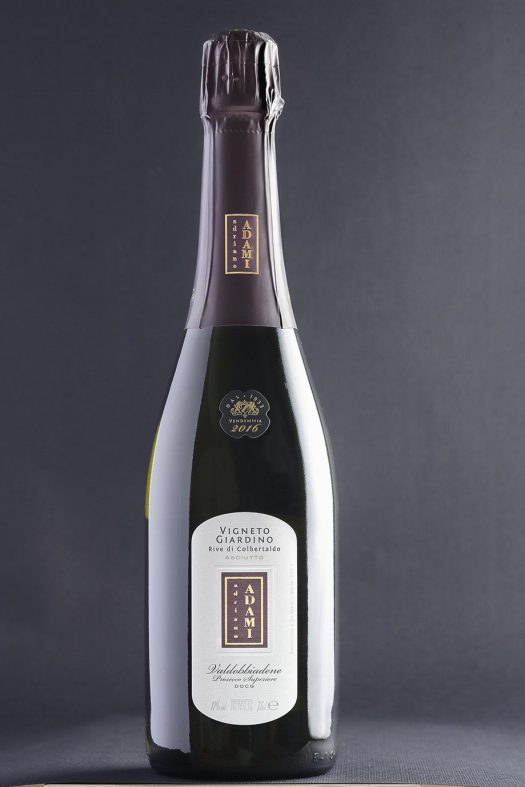 Adriano Adami is a top-tier winery focused on Prosecco, having produced this classic Italian wine since 1933, when it created Italy’s “first commercial “cru” Prosecco from a single vineyard bottling from his Vigneto Giardino site.”

Some additional backstory on Adami:

Adami owns vineyards and has well-established long-term relationships with the best vineyard sites across the Prosecco region, especially in the hilly DOCG zone, where the varying expositions and microclimates create conditions for complex wines. In the cellar, Adami goes the extra mile to respect and showcase the unique terroirs of each site. Prior to secondary fermentation, Adami’s still base wines are aged with extended lees contact, a time-consuming practice that is not common among other Prosecco producers. This extra step results in sparkling wines with a fuller, richer body and more complex fruit flavors. Additionally, Adami does not employ the common Prosecco production process wherein secondary fermentation takes place shortly after harvest in one large batch. Instead, Franco Adami completes his secondary fermentations in over 100 small batches throughout the year (almost two a week!), which allows the winery to deliver the freshest possible wines to the market.

The winery sent us a quartet of wines to taste, representing a range of styles and regions of production. Let’s dig in.

2019 Adami Garbèl Prosecco DOC Treviso NV Brut – This entry-level offering is creamy but fruit-forward, offering substantial notes of peaches, pears, and applesauce, with a light squeeze of lemon over the top. Uncomplicated but perfectly approachable, with a light finish of vanilla cream.  12-13 grams sugar/liter. B+ / $17

NV Adami Bosco di Gica Valdobbiadene DOCG Prosecco Superiore Brut – This is Adami’s best-known wine worldwide. Nonvintage and bottled with 8 grams of residual sugar, it drinks as quite dry, with a heavy melon component, a healthy grating of lemon zest, and some apricot notes on the finish. Slightly salty but only on the conclusion, where the saline notes play a nice foil against the fruit. B+ / $20

2019 Adami Col Credas Valdobbiadene DOCG Rive di Farra di Soligo Extra Brut – I tasted this exact wine in a recent class on Conegliano Valdobbiadene Prosecco and my thoughts remain the same. But first: “This bottling embodies Franco Adami’s dedication to his craft as it took him over 9 years to develop and perfect this wine. Fruit from the Col Credas vineyard, purchased by the Adami family in 2001, was originally used as a blending component for other wines in the portfolio. Since 2011, Adami has bottled Col Credas as a single-vineyard wine.” 4 grams sugar/liter. Very dry with saline notes, and today showing a light melon character that pairs well with the bone-dry palate. Vaguely floral on the back end, but only in passing. My favorite of Adami’s offerings today. A- / $23

2018 Adami Vigneto Giardino Valdobbiadene DOCG Rive di Colbertaldo Asciutto – With 19-21 grams/liter of sugar, it’s the sweetest wine in this collection, made from grapes from the Adami family’s first vineyard, purchased in 1920. In 1933, Abele Adami shared a single vineyard bottling of Vigneto Giardino at a showcase of Italian wines — it was the first single-vineyard Prosecco ever made. Despite plenty of sugar, it’s less overtly sweet than you might expect, the sugar giving the wine an intense creaminess that pairs well with notes of spiced pears, lemon curd, and orange flowers. B+ / $23