Grace O’Malley, formally Grainne Ní Mháille, was born in 1530 and became known as the “pirate queen of Ireland,” though that seems to be more in the sense of leading maritime vessels against the English navy, not the whole raping and pillaging side of things.

Now Grace lends her name to a new Irish whiskey brand, a blend of triple and double distilled single malt (malt is 46% of the blend) plus grain whiskeys, all of ages ranging from 3 to 10 years old. Barrel aging is done in a combination of ex-bourbon, French oak, and rum casks. That’s quite a blend indeed! Let’s give it a try.

The nose is gentle and approachable, in keeping with most Irish whiskey bottlings. Lightly honeyed breakfast cereal leads the way, and there’s more of an earthy character than expected underneath that. That said, it’s quite ephemeral on the whole, lightly grassy and a tad nutty and always pleasant, but fading all too quickly.

The palate finds just a bit more going on, with an initial rush of honey grahams tempered by smoldering earth, some fresh-cut grass, and a light note of milk chocolate. Bready with notes of brown sugar, what lingers on the finish is a touch of butterscotch and baking spice — but, as with everything with Grace O’Malley, it’s only a touch.

So light and gentle that it’s almost flighty, I can’t see how anyone would not enjoy a dram or two of this whiskey. Whether they remember it the following day, that’s the question. 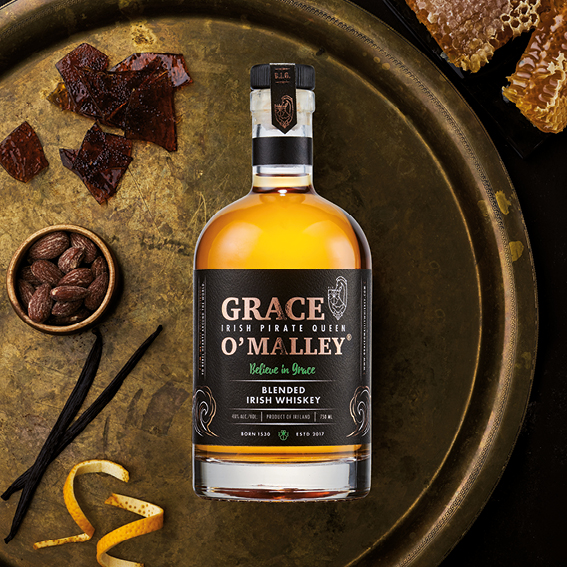