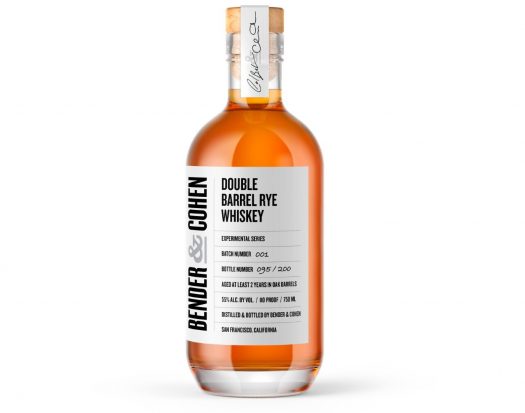 If you recall Bender’s Rye, you know half the team behind Bender & Cohen, which recently added the latter’s name to the brand for Bender’s “experimental playground,” which will be used for oddball, small batch releases — the first of which is this double-barreled rye.

Bender & Cohen Double Barrel Rye is made on San Francisco’s Treasure Island from organic California grain (100% rye) which is milled, mashed, fermented, and pot distilled on site. The whiskey. The whiskey was then split up and spent at least two years in a pair of separate virgin American oak barrels, charred to a heavy #5 level. One barrel was aged in a sealed shipping container, the other outside, completely exposed to the elements. Eventually they were blended together and bottled at 55% abv.

That’s a one of a kind whiskey, for sure, but I was surprised to find plenty of familiar elements from the craft whiskey playbook at work here. The nose is full of fresh-baked rye bread aromas, a hefty spray of thyme and rosemary, and a youthful undercurrent of petrol. It’s intense and expressive — surely thanks to that heavy char — with a hint of dill on the back end.

The palate is fiery and, again, heavy on the roasted grain character, largely (and surprisingly) to the exclusion of secondary elements. Water is your friend here, tempering the cereal well — but also bringing out a rather vegetal note and a substantial punch of smoky mesquite, almost like a scrub brush fire. That smokiness doesn’t totally gel with the experience up to this point, though, making for an intense and frontier-like encounter that’s tough to get past. There’s a hint of cocoa powder on the finish along with a roasted mushroom note, but these come more out of left field than part of an integrated whole.

I love the idea of this rye, but I think the heavy char and relatively young aging cycle ties the spirit’s hands too much. 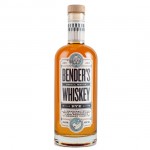