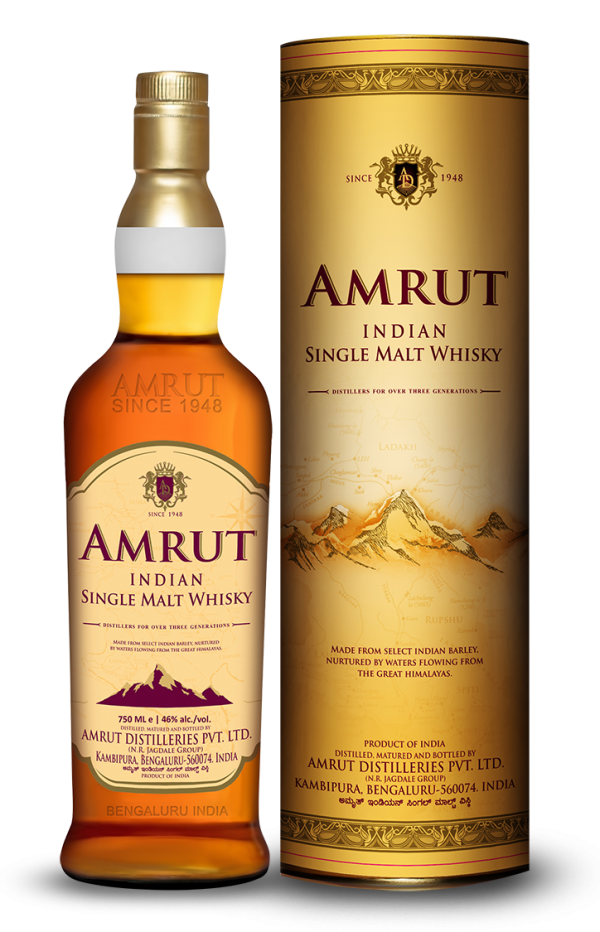 Earlier this month, we reviewed Amrut’s peated single malts, made with sourced Scottish barley. Now we’re rounding out the core line up with a look at two single malts distilled in India from 100% Indian ingredients. Both single malts, a standard and cask strength, are distilled from barley reportedly sourced from the states of Haryana, Punjab, and Rajasthan. The whisky is then aged in a mix of new American oak and used bourbon barrels for only 4 to 6 years. That may seem young, but the intense Indian climate matures whisky up to three times faster than in Scotland (and evaporates it out of the barrel at a staggering 12% a year). Let’s see how these all-Indian single malts compare to the rest of Amrut’s line up!

Amrut Indian Single Malt Whisky – The nose on this one is spicy and bright with a distinct oily, raisin quality that suggests sherry aging even though there apparently isn’t any. Beyond that, it’s a mix of earthy and fruity with banana, green apple, clay, and coconut husks. A thin note of caramel sauce and shortbread weaves everything together. On the palate, it’s light and malty, with sweet notes of chocolate cocoa mix, licorice, butterscotch candies, and saltwater taffy. The finish is medium length with honeyed malts and a touch of dark fruits. Compared against similarly made Scottish single malts, you can definitely see the difference the Indian barley imparts. 92 proof. B+ / $60 [BUY IT NOW FROM CASKERS]

Amrut Indian Cask Strength Single Malt Whisky – The extra proof hasn’t made this whisky punchier on the nose, but it does restrain the fruit, leaving drier notes of light-roast coffee, chocolate shavings, and pastry crust behind. Add to that some ginger root, black tea, and mahogany, and this has a decidedly different nose than the standard offering. The palate, however, stays truer to the original, albeit with a bit more heat and spice underneath and an oilier body. Notes of semi-sweet chocolate and salted crackers become sweet aniseed and juicy citrus on the mid-palate. The finish is generous with buttery caramel and honeyed barley. 123.6 proof. A- / $80 [BUY IT NOW FROM CASKERS]