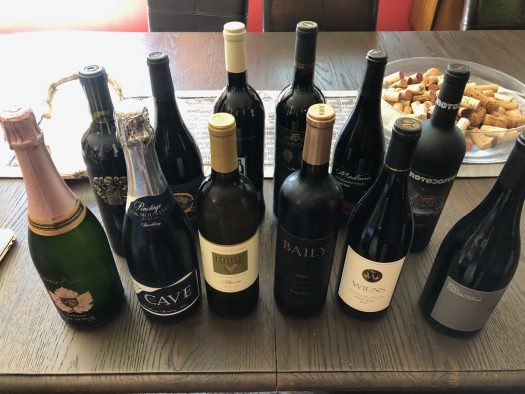 While you rarely see Temecula Valley-grown wines in stores, the region is hopping with tons of wineries, all hot destinations for southern California tasters, thanks to its convenient location about an hour northeast of San Diego. 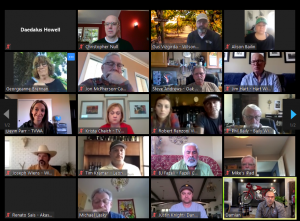 With travel shut down, visiting Temecula isn’t an option right now, so in lieu of bringing media to the region, Temecula came to us, courtesy of Zoom and UPS. In an online tasting session, 12 winemakers led us through 12 wines, spanning a wide range of grape varietals and styles — and proving that Temecula is a serious wine region that should get more attention.

2015 Carter Estate Winery Blanc de Noirs – 80% pinot noir, 15% chardonnay, 5% pinot gris. Crisp and fruit-forward, with a blend of green apple, pear, and lemon — with notes of biscuits on the back end. Lively and engaging, with moderated fizz. A-

NV Oak Mountain Winery Sparkling Pinotage – An unusual rose sparkler made from pinotage. Quite strange on the nose, with an oregano and thyme element on the nose. Heavily herbal on the palate, it’s extremely savory until the curious almond note on the finish. A definite conversation piece. B-

2019 Hart Family Winery Albariño – Ample saline and bright citrus makes for a fairly classical albarino, with tons of enduring acidity and lots of juicy lemon and an herbal note lingering for days. It’s perfectly approachable on its own but would make a solid pairing with seafood. A-

2019 Baily Vineyard & Winery Semillon – This is a simpler, quieter wine clearly built as a mild aperitif. Gentle notes of almond, white flowers, and a hint of melon give it a delicacy you rarely find in New World winemaking. B+

2018 Wiens Family Cellars 2018 Pinot Noir – Racy and peppery, this is a big pinot that is reminiscent of wines made further north. Slightly doughy on the front end, the mix of red and black fruit pops, though things feel a bit overcooked on the chewy finish. B

2017 Leoness Cellars VS Syrah Alessandro Vineyard – Syrah is one of the most popular grapes grown in Temecula, and Leoness’s bottling feels like a spot-on rendition of the grape. Big and peppery with a charred beef element on the nose, the savory palate is delightfully laced with silky black fruit — and a reprise of black pepper on the back end. Bold as hell. A-

2016 Robert Renzoni Vineyards Estate Syrah – The bottle alone, with its metallic crest on the front and a golf ball marker on top of the cork, is a conversation piece. Inside the bottle you’ll find a remarkably fruity experience. The elegant nose gives way to an explosion of strawberry jam, with loads of vanilla informing the finish. Needs a big meal to balance things out. B

2016 Fazeli Cellars Shiraz – From the only Persian heritage winery on southern California (hence the use of “shiraz” instead of “syrah,” Shiraz being a still-standing city in Iran). This wine splits the difference between the above two wines, offering a strong blackberry/blackcurrant element on the tongue and a gently meaty, peppery, savory element weaving throughout. The finish is quite drying. B+

2017 Akash Winery Three’s Company – A blend of petite sirah (70%), zinfandel (20%), and cabernet sauvignon (10%). A bright and fruit-forward wine, this is a masterful blend of bold red fruit, baking spice, and dessert-like vanilla. Opulent and decadent, it’s a powerhouse that will stand up to the most ambitious of meals. A-

2017 Wilson Creek Winery Meritage – A Bordeaux style blend with the full five varieties. It doesn’t come across like Bordeaux, of course, but rather hits hard with fruit up front before tempering things with a lick of earth, some oak, and a finish that’s big with chocolate. A bit on the jammy side for my taste. B

2015 Danza del Sol Winery Madrona – An 80/20 tempranillo/grenache blend made in the Rioja style. Big with acidity and fresh fruit, the black cherries pop along with herbal notes of cloves, white pepper, and some hibiscus. The high acid was initially a little off-putting, but after easing into it I really started to find its charms. B+

2017 Doffo Winery Motodoffo Super Tinto – A 15.6% abv monster blended from 60% malbec, 30% cabernet sauvignon, and 10% zinfandel. Spicy and jammy, it’s a face-punching experience that exudes blueberry notes, chocolate, and vanilla. Hints of pepper on the finish. So powerful and decadent, it’s a wine that demands a big meal to pair it with. A- 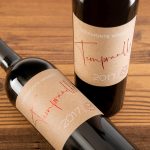