We tasted the clear spirits of Top of the Hill Distillery (TOPO), including their white whiskey, way back in 2013. The Chapel Hill, North Carolina-based distillery has been hard at work tweaking, adding new products, and barrel-aging their whiskey since then, so we thought we would check in on their latest offerings. TOPO is one of the few certified organic distilleries and sources its grain, mostly red wheat, from within 100 miles of the distillery. Let’s see what they’ve been up to in the last seven years.

TOPO Vodka (2020) – We weren’t blown away by an earlier release of this Carolina wheat-based vodka, but the distiller encouraged us to give it another go following some unspecified changes to the distillation. On the nose, the grain is still there, but it’s much softer than in our last encounter, with plenty of creamy vanilla in the mix. The palate is still marshmallow sweet, but the medicinal quality underpinning everything has been reined in somewhat. The rough edges are gone, but it could still benefit from a little more fine-tuning. 80 proof. (Reviewed: Batch #28.) B / $29

TOPO Carolina Straight Wheat Whiskey – Made from a 100% wheat mash, pot-distilled and aged 2 to 3 years in new, #3 char barrels, this is the latest addition to the TOPO lineup. The nose doesn’t show too much youth. The grain is caramel coated and sweet with an earthy undercurrent that helps to hide some of the alcohol and young oak notes. The palate is surprisingly rich and flavorful, with creamy toffee and butterscotch, cinnamon stick and graham cracker. The oak is a touch burly at times, giving things a smoky quality that dries out a bit on the finish. On the whole though, it’s very well-balanced with a lingering vanilla cream note that I quite enjoy. 92 proof. (Reviewed: 2017 release.) B+ / $50

TOPO Spiced Rum – Distilled from North Carolina-grown sugar cane and flavored with spices ground with a mortar and pestle (sounds tedious), this is the only rum in TOPO’s lineup. The nose is unusually citrus-forward for a spiced rum with lots of sweet orange peel and grapefruit. It’s less spice cabinet and more incense or even chewing gum. On the palate, this one tastes more like a clear rum with flavoring added and less of a traditional spiced rum. Again, the citrus dominates with notes of orange pulp covered in allspice. It’s got a decent body and texture, so the base spirit has promise, but there’s very little in the way of a finish. And I just can’t get over the excessively saccharine, fruit juice notes. 80 proof. (Reviewed: Batch #3.) B- / $25 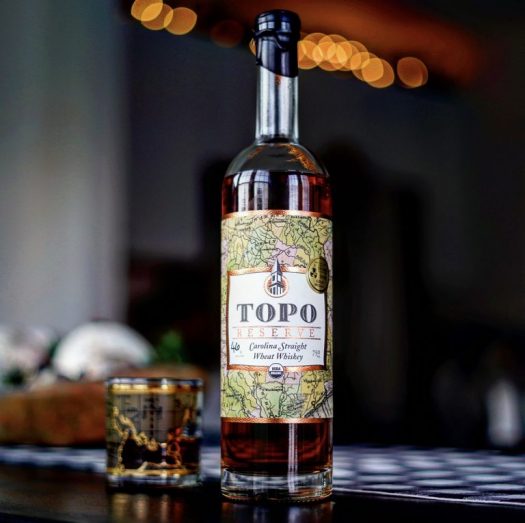