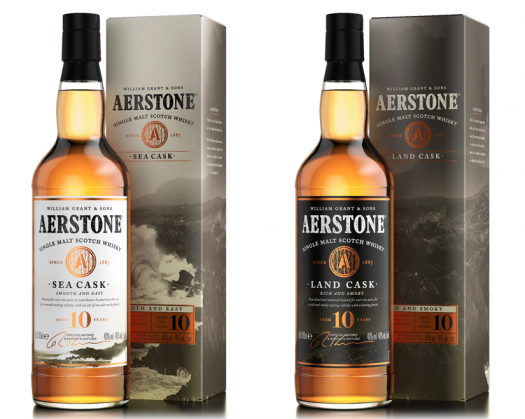 It’s not every day that a Scotch distillery launches a new single malt whisky brand, but here we are: William Grant & Sons, best known as the producer of Glenfiddich and Balvenie, has dropped a pair of 10 year old single malts under the name of Aerstone. The two expressions focus on “the impact of maturation and malting on flavor.” They’re known as Sea Cask 10 Years Old and Land Cask 10 Years Old.

What’s the big idea here? Let’s get the Grants to explain:

This new range aims to simplify the taste messaging of the single malt category and help new single malt drinkers navigate flavors easily through clear taste descriptors on the bottle and corresponding packaging. The range showcases two different styles of whisky under the same brand, allowing consumers to easily understand the spectrum of flavors and demystify the traditional – and often complex – language associated with Scotch.

“William Grant & Sons has long been known for our premium Scotch portfolio, and we wanted to create a brand that offers a great everyday single malt while also giving some basic category education,” said Kate Massey, Senior Brand Manager for Innovation in the U.S. “We recognize that for some consumers, whisky can seem complex and intimidating. With Aerstone we want to break down some of those barriers and invite existing drinkers and new entrants to learn about all the different flavors and styles of single malt Scotch.”

“We have developed two very different and evocative flavor profiles under the one brand, both inspired by the Scottish environment and raw elements where we age our whisky, added Brian Kinsman, Master Blender at William Grant & Sons. “With a 10 year age statement, people can expect a well-rounded single malt whisky with depth of flavors that will intrigue not only new drinkers, but also more experienced single malt enthusiasts.”

We received both for review, so let’s dive in (or, in the case of Land Cask, walk on). Both are 80 proof.

Aerstone Sea Cask 10 Years Old – One might expect Sea Cask (tagline: “smooth and easy”) to exhibit briny, peaty notes, but this malt is quite gentle and hardly maritime at all. While the nose is indistinct, the palate features lots of caramel, vanilla, and almond, iconic bourbon-barrel influences all of them. These barrels were aged near the sea on the Ayrshire coast, and indeed there’s a hint of the promised sea spray on the finish, but it’s quite mild, giving the conclusion a welcome, slightly salty kick. While there’s nothing aromatically special here, the overall experience is a wholly approachable, straightforward single malt that’s priced closer to a blend. Transformative it’s not, but I would mix with it any day at this price. Compare to a younger Speyburn. B+ [BUY IT NOW FROM DRIZLY]

Aerstone Land Cask 10 Years Old – Again perhaps confusingly, Land Cask is peated — but named because it is aged further inland. I was expecting something mild, a la Johnnie Walker Black Label, but the peat is surprisingly heavy here, landing, let’s say, halfway to Islay. Again, the nose has a scattered focus, coming off as boozy and grainy, with a healthy edge of wood smoke that grows in strength over time. The palate finds the smoke hitting immediately, lightly sweet with a barbecued meat character and notes of apples, brown butter, and sesame oil. The finish sees the smokiness fading significantly, with memories of campfires and spit-roasted meats lingering. Land Cask only halfway commits to peat, which puts it in a weird no-man’s-land between lightly peated whiskies and the real stuff from Islay. I’d probably use this in place of Black Label if I needed a smokier punch, but wasn’t ready to go full-on Laphroaig. B [BUY IT NOW FROM DRIZLY] 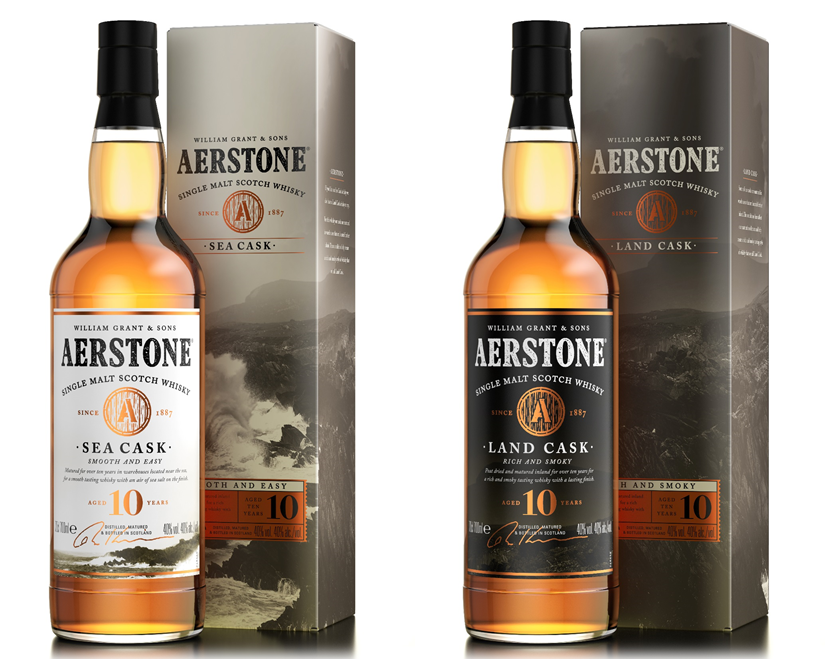