If you’re apprehensive of grappa, you probably tasted it before and found it to be strong, harsh, and unforgiving. But times have changed, and it is time to give grappa a proper try because, as I recently found, the craft distillate made, mixed, and aged today is not your pappa’s grappa. 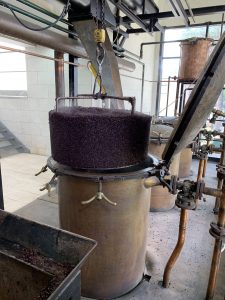 Grappa’s history explains its mixed reputation. Originating in Italy, grappa was first developed by winemakers attempting to make use of every part of the grape. After pressing the grapes, rather than throwing away the pomace (skins, seeds, and stems), vintners distilled it into a strong liquor. In the past, technology did not exist to carefully extract the fine flavors of the pomace without also extracting bitterness from the stems and seeds as well. Also, vintners frequently distilled the pomace from many different kinds of grapes together, making for a muddled product. Even so, many Italians appreciated this bold, powerful liquor, and it was typically served at very high proof (often at 60% alcohol). This was the drink Italian soldiers carried with them to endure cold nights in the field, and grappa’s harshness was a part of its manly virtue.

But times have changed. I recently had the chance to go to Italy, visit grappa distilleries, and sample a variety of the newest products. The grappa made today is the result of careful production that starts a few hours after the grapes have been pressed and ends when it is bottled. The result is a range of fine liquors that have nuanced, distinctive flavors: from raisins to cherries to lemons and more. Grappa is brandy’s cousin, and the extraordinary examples being produced today prove that it deserves serious attention. 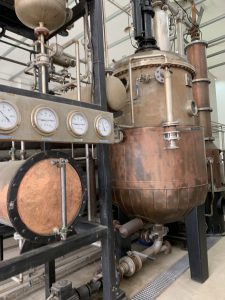 The biggest changes to grappa production in recent years are the careful selection of pomace and the introduction of high technology. Whereas the pomace from multiple grapes was indiscriminately mixed together in the past, it is common today for distillers to make grappa from the pomace of individual grape varieties. Grappa tastes very different when it is made from the pomace of merlot grapes than when it is made from muscat. The distinctive flavors of the individual varieties are heightened through the use of technologically advanced distilling equipment that carefully controls temperatures and scientifically minimizes the inclusion of bitter elements in the final product. The character of the individual grapes finds brilliant expression in the grappas that result. Blending is still common but it is often done today to combine complementary flavors, not for mere convenience.

Grappa is also now frequently aged in oak. There are purists who think unaged grappa is best, but many appreciate the flavors that result

from some time in wood. French oak is used most commonly, but there is frequent experimentation. Aging in French oak adds flavors of vanilla to grappa and can round out the liquor. Those who appreciate bourbon will find that aged grappa naturally appeals to their palate.

As my trip to grappa distilleries progressed, I came to appreciate the connection between the grapes grown in different regions and the products they were used to create. I don’t think I’ll ever forget an amazing meal I had in Tuscany complemented by a bottle of brunello and followed with a glass of grappa riserva made from the same grapes (sangiovese) and aged for at least 18 months. The fruit and tannins in the wine could be identified and appreciated in the grappa and made for a truly rare culinary experience.

A wide range of new grappas are making their way to the U.S., and they deserve attention. Grappa has a complex history, but if recent examples are any indication, it also has a bright future.