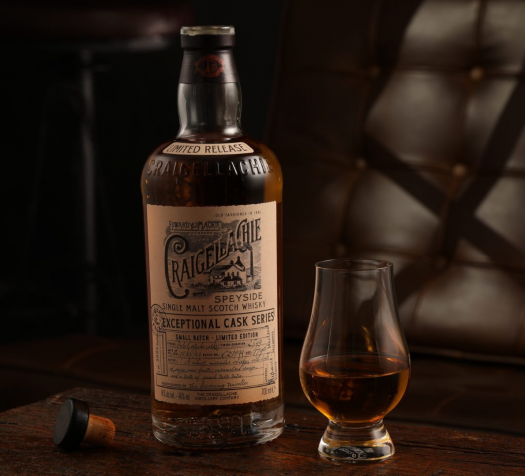 Recently, Aberfeldy and Craigellachie launched a collective five limited edition single malt whiskies, all bottled at cask strength and known together as the Exceptional Cask Series.

There’s perhaps going to be some confusion about this release because these are all billed as “single cask” offerings (with one double cask offering in the Aberfeldy lineup), which might have you thinking these are drawn from just one cask. That’s not the case, though, as each release comprises a few thousand bottles and each expression probably involves a dozen casks or more. In this release, “single cask” means the whisky is not finished in a second cask, and “double cask” means it is.

That said, they’re all still quite limited. The releases won’t be repeated, according to brand owner Bacardi, so if you’re a fan, you need to act quickly. (That said, you should expect to see other, different Exceptional Cask Series whiskies from these two distilleries to arrive in 2020 and beyond.)

We’re splitting our reviews up into two articles, one on Aberfeldy and Craigellachie. First up is a pair from Craigellachie, a sleepy distillery in the heart of Speyside, with a 19 and 23 year old — neither to be confused with the standard, lower-proof bottlings of the same age. We’ll visit with Aberfeldy in a few days. Let’s go!

Craigellachie Exceptional Cask Series 19 Years Old – Matured in second fill sherry butts. No mistaking the sherry here, as this is a rich and soulful whisky with a heavily nutty character on the nose along with hints of dark chocolate and furniture polish. The palate kicks up much of the same character, boldly nutty with notes of spiced sugar, vanilla cookies, sesame oil, and a bit of red pepper. Racy strands of citrus peel and cloves linger on the lengthy, immersive finish. Despite 19 years in a sherry cask, it’s been tempered enough (thanks to the second fill, probably) to find a near perfect balance. Tough to put down. 110.4 proof. A / $200

Craigellachie Exceptional Cask Series 23 Years Old – Matured in first fill oloroso sherry casks. An incredibly deep amber in color, the sherry seeps out of every pore to reveal an oily, nutty, almost meaty aroma which exudes notes of wood polish and melted butter. A moderate fresh wood component evolves in the glass over time. The palate is less austere than expected, with a surprising punch of baking spice that overpowers the sherry influence. Light touches of butterscotch and malted cereals push through a sieve of brandied orange peel as the palate builds. The finish is just a bit tight — owing perhaps to the high abv — with some leathery notes playing off against the orange peel elements. That said, it’s every bit the delight that the 19 year old bottling is, albeit quite a different animal. 115 proof. A / $300