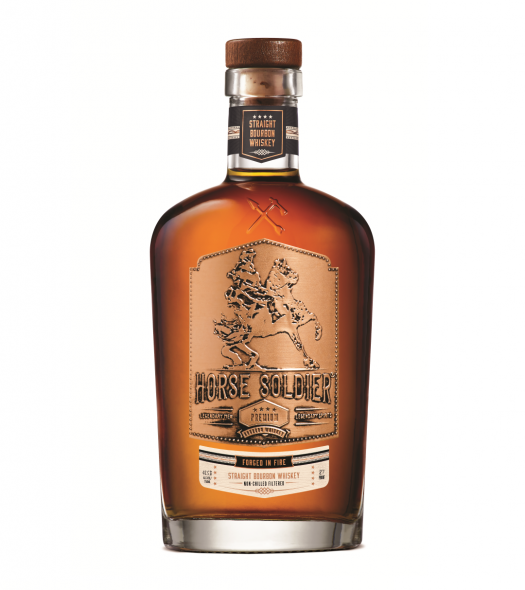 Horse Soldiers? American Freedom? If you’ve pegged a military connection to this new whiskey brand, you’ve got your finger on the pulse. The distillery was started by a group of Special Forces Veterans who were the first soldiers in Afghanistan after 9/11. Horse Soldier is a reference to the Green Berets who were featured in the movie 12 Strong.

As for Horse Soldier (the whiskey), the distillery distills its own juice in Columbus, Ohio (using a partner distillery while its own facility is being built), curiously choosing to use two different mashbills in the process: one with rye, one with wheat. The company also has a 12 year old bottling, which is sourced, and recently added a rum to its production.

Today we’re looking at the three bourbons which comprise the bulk of its whiskey lineup. Thoughts follow.

American Freedom Distillery Horse Soldier Bourbon Whiskey – (White label.) 70% corn, 20% red winter wheat, 10% barley; no age statement. Big cereal and lumberyard aromas evoke young craft whiskey, with hints of red pepper and a modest menthol note adding some nuance. The palate is sultry and slightly smoky, a bit green at times but spiked with notes of dark chocolate and hazelnut, both of which also add some intrigue. The barrel char character makes a big return on the finish, along with a slight furniture polish note. It’s a credible craft bourbon, but nothing too far from the straight and narrow. 95 proof. B / $60 [BUY IT NOW FROM CASKERS]

American Freedom Distillery Horse Soldier Premium Straight Bourbon Whiskey – (Copper label.) 65% corn, 30% rye, 5% barley; aged at least two years. A much more approachable whiskey from the start. The wood is dialed back and restrained on the nose and the whiskey’s fruit character is pumped up, with plum, cherry, and grape must notes all evident. The palate is both fruity and nutty in roughly equal proportion, and a heavy dose of spice and a grind of black pepper add some fun. The finish sees wood and leather slowly emerging more clearly, though it never falls too far out of balance. Horse Solder Premium may not be overwhelmingly complex, but it is an easy drinking and overall enjoyable whiskey. 87 proof. A- / $40

American Freedom Distillery Horse Soldier Barrel Strength Bourbon Whiskey – (Silver label.) Back to the 70% corn, 20% red winter wheat, 10% barley mashbill; again, no age statement. This is a barrel proof version of the first whiskey reviewed above. As expected, it’s a bit of a blazer without water, a fireball of cinnamon spice, red pepper, and smoldering lumber on both nose and palate. Bringing it down to a more approachable proof, well, brings it more in line with standard Horse Soldier, again showcasing plenty of wood, with a nutty, chocolate-laced, Butterfinger-like character adding some fun to the experience. Ultimately it’s a slightly more nuanced whiskey than the standard expression, but the higher proof does give you a bit more flexibility to toy with and to coax out some slightly different elements. 111 proof. B+ / $95 [BUY IT NOW FROM CASKERS]