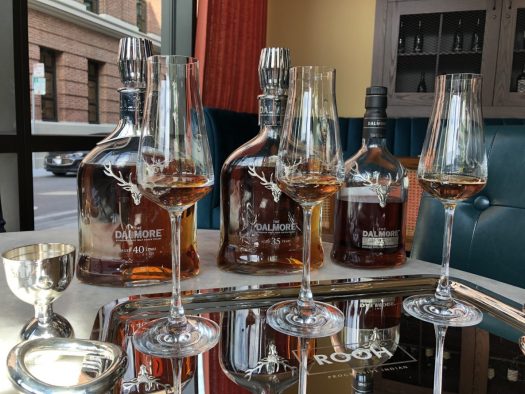 Over the course of my career I’ve had many opportunities to drink old whiskey, but this experience from The Dalmore has to go down as one of the most opulent, intricate, and interesting. The concept: The Dalmore is partnering with a handful of high-end restaurants and bars to provide a unique whisky experience called 100 Years of The Dalmore, consisting of three one-ounce pours of some of the distillery’s finest stock: The Dalmore 40, The Dalmore 35, and The Dalmore 25, for a grand total of 100 years worth of single malt whisky.

The experience is so rare that there’s only one place in all of California where it can be enjoyed: ROOH, a high-end, Indian-inspired restaurant in San Francisco. (You can also find it at New York City’s Baccarat Hotel and Las Vegas’s Picasso at the Bellagio.)

ROOH and The Dalmore recently invited me to sit down for the tasting — the first time it’s been experienced by a member of the media — which I shared with Craig Bridger, The Dalmore parent company Whyte & Mackay’s Head of Education for the brand. (For the record, Bridger had to pay ROOH full price for the tasting, which runs a cool $1200.)

Served on a custom silver tray and in unique Baccarat glassware, the tasting is poured tableside. Best to wait until after you’ve finished them off to sample some of ROOH’s delightful cuisine — though they were some of the most innovative and intriguing Indian snacks I’ve ever encountered, the spices aren’t the best complement for single malt Scotch.

Overall, the tasting was a phenomenal experience. And without further ado, here are individual notes on each of the three whiskies in the 100 Year lineup (plus a bonus review of The Dalmore 18, which Bridger ordered for us as a denouement to the experience). Retail bottle prices are included below. 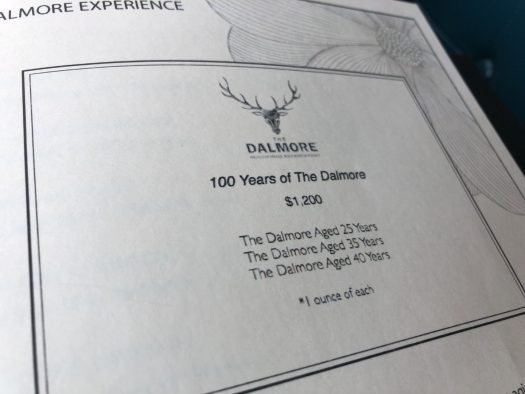 The Dalmore 25 Years Old – Let’s kick things off with this youngster, initially aged in American white oak ex-bourbon casks before being divided into hand-sourced 25-year-old sweet Palomino Fino sherry butts and 1980 first-fill bourbon casks. It is finished in tawny Port pipes from Graham’s. The nose is initially quite floral, with a Maraska cherry note making its fruitier (and Port-driven) notes pop. The palate sees some balsamic, then an intensely nutty sherry element that comes across as hazelnut in tone. On the finish, it’s again boldly nutty with hints of marzipan, and a light hint of savory, almost vegetal character. Complex, but deftly balanced. 84 proof. A / $1200 [BUY IT NOW FROM CASKERS]

The Dalmore 35 Years Old (2017 Edition) – This rarity was first released in 2016 as a complex whisky that is initially aged in bourbon casks, then is split into three different barrels — a first-fill bourbon barrel, a Matusalem Sherry Butt, and a Colheita Port pipe. These three barrels were then married in a second Port pipe before released. Then, for the 2017 release (reviewed here), that liquid was transferred to 30 year old Matusalem oloroso sherry butts, then bourbon casks again before finally bottling. Whew! This complexity sees quite a bit more wood influence on the nose, with notes of incense, flambeed banana, and ample nutty/citrus-driven sherry notes. Hints of roasted meat give this a certain fireside austerity. The bold and aggressive palate is bursting with vanilla, with notes of maple and tobacco building up to a drying, toasty finish that actually sees some of the malty cereal notes still pushing through everything. 80 proof. A- / $5500 [BUY IT NOW FROM DRIZLY] 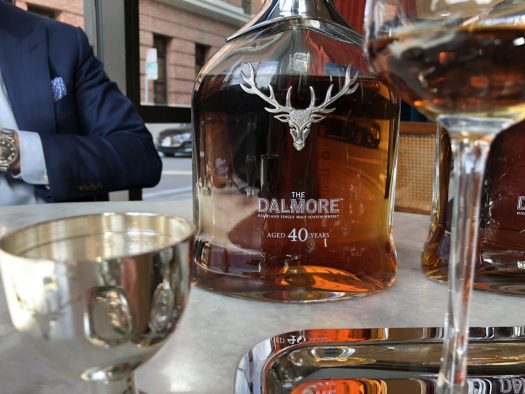 The Dalmore 40 Years Old (2018 Edition) – Another complex series of vattings saw the construction of this bottling, which was originally released in 2017 as a bourbon cask-aged spirit finished in 30-year-old Gonzalez Byass Matsualem oloroso sherry butts. This was blended with whisky aged in bourbon barrels then finished in 1970 Graham’s Colheita Port casks to create the 2018 release of Dalmore 40. The nose is surprisingly quiet here, but a bit peppery and nutty with clear sherry notes. On the palate: It’s absolutely gorgeous stuff. Chocolate cherry notes and hints of grape must, some really interesting notes of pineapple, plus loads of hazelnuts and walnuts. The finish isn’t overwhelming in its length, but it does smolder with notes of wood, nuts, and dark chocolate, making for a near-perfect conclusion to the experience. 84 proof. A+ / $6200 [BUY IT NOW FROM DRIZLY]

The Dalmore 18 Years Old (2019) – Last reviewed in 2010. This is a tough come-down from that trio, and while Dalmore 18 is a fine little dram, it’s nowhere near as complex and fascinating. The nose is heavy with oak and wood, weighing it down a bit with a certain doughiness and notes of matchsticks. There’s a distant maritime quality here, too. The palate is rich with toffee and cigar wrapper notes, slightly smoky, as is the finish, which has lots of wood, barrel char-driven depth. 86 proof. B / $185 [BUY IT NOW FROM CASKERS] 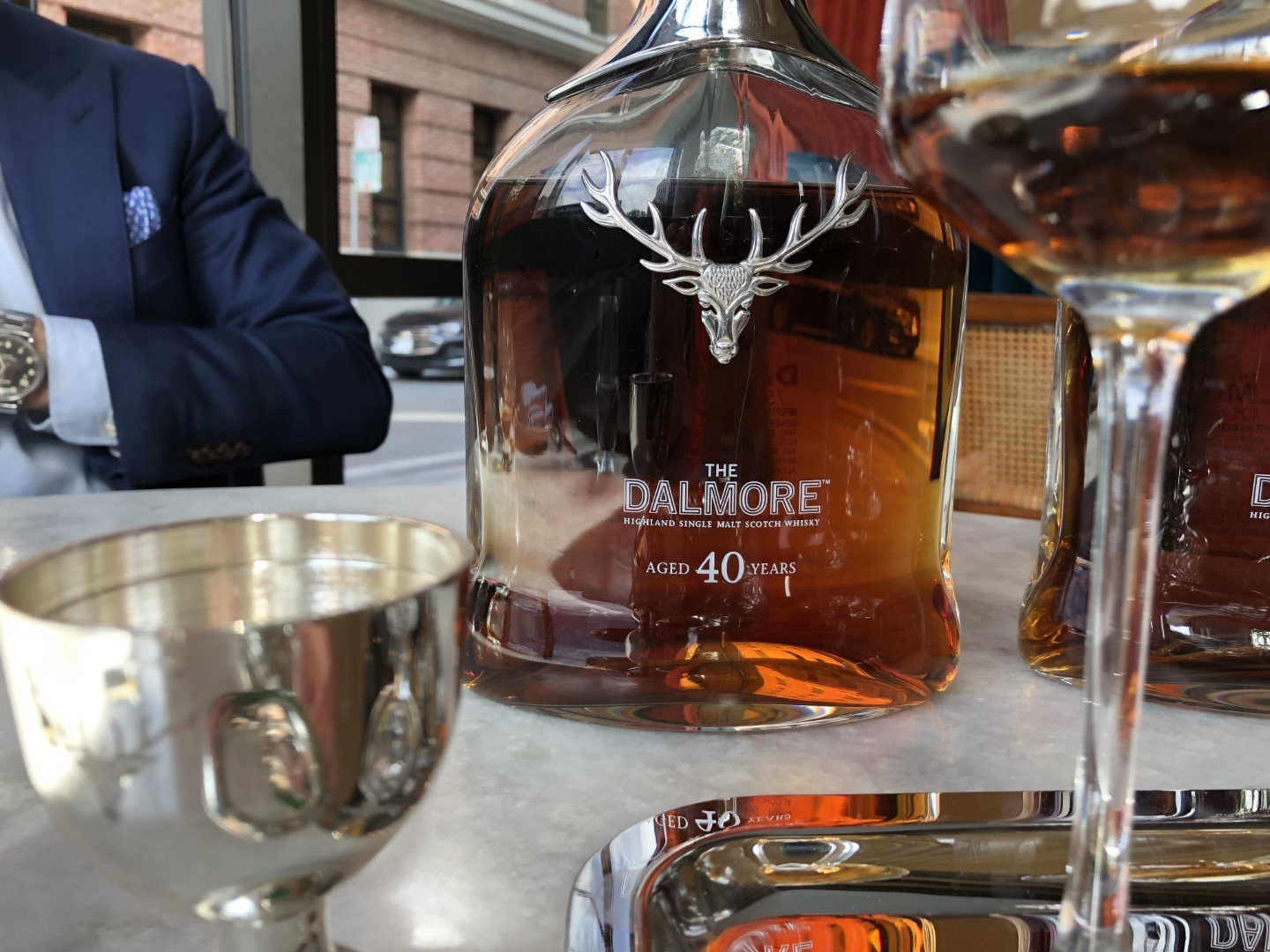