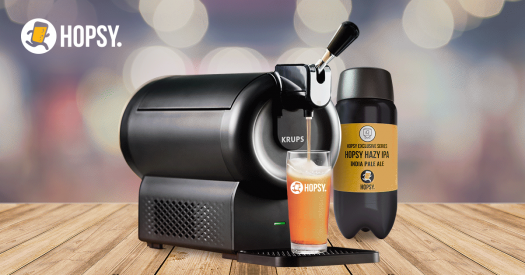 Back in December of last year Drinkhacker covered the Hopsy Home Draft system, earning a respectable B+. The conclusion was that the machine was of high quality and succeeded in its mission of providing a beer-bar draft experience at home, however it was not without flaws. Now, only months later, Hopsy is proud to introduce its new SUB Compact system. Will the redesign iron out the kinks of the first model? I’ve spent a week with the machine and can report plenty of positive qualities, but unfortunately a few negatives as well.

For those new to the Hopsy, the company’s concept is “fresh draft beer at home.” What began as a growler delivery service has grown into delivering mini-kegs, called “Torps,” to be used with a proprietary machine that simulates a kegerator. While not a true draft system, the SUB Compact is a smart design that works like this: when you pull the handle the SUB Compact pumps air into the Torp to maintain a pressurized environment, pushing beer out of the bag and into your glass. It is important to note that the pressurized air surrounds the bag full of beer so that air never touches your beer. A growler will last a few days once open; a Torp two weeks. The SUB Compact also keeps the beer chilled at 36 degrees which is an ideal temperature for most draft systems.

When comparing the new SUB Compact to the old design I can only report positives: it is smaller, lighter, the pull of the handle feels great, and it’s top-loading so that you can open the machine while maintaining pressure. The Torps are fairly easy to load, but do pay close attention to the instructions. If you feel a little nervous loading your first Torp, don’t worry as you’ll soon get the hang of it.

There are a few quirks to point out: The biggest is that you’re locked into the Hopsy ecosystem. You cannot use anything but Hopsy’s own 130-ounce Torps with the SUB Compact, and the Torps cannot be filled at your local brew-pub or with your homebrew. Additionally, the Torps are not cheap. If you’re a Hopsy club member they will cost you about $17 each for the equivalent of 11 bottles of beer. Factoring in the $139 price tag of the SUB Compact (this price does include two Torps) price-sensitive beer fanatics may better served buying good bottled beer from a local retailer. However, if you live in an area with limited beer choices, value the convenience of delivery, and want to taste a variety of unique beers, then it’s arguably worth the cost. In fact, some beers offered are exclusive to Hopsy, which is the best reason to join the club.

Second, the Torps could be more informative. Only the most basic information about each beer is communicated, such as the brewery, alcohol content, and an arbitrary scale used to measure bitterness and flavor intensity. On a phone call with Hospy’s CEO it was revealed that including information such as IBUs and hop varieties confused most customers rather than helping them. To that, I recommend printing a QR code on the label that can be scanned to tell the story of the brewery, how the beer was brewed, and all manner of beer-nerd info about what’s in the glass. Most distressing is the lack of a “brewed on” date on the Torp; including this would solidify Hopsy’s message of “fresh draft beer at home.”

Finally, I would like to see temperature controls on the SUB Compact. While 36 degrees is ideal for low-gravity beers, more robust and malt-rich styles such as Imperial Stouts are better served warmer. By including some kind of temperature control you could serve every style of beer at its ideal temperature, though this would of course raise the price and complexity of the device considerably.

Overall, I like Hopsy’s SUB Compact. The price is a little high but reasonable for what you get: impressive, exclusive beers made by celebrated breweries delivered to your home and served from a smartly designed home draft system. Minor quirks aside, Hospy comes recommended and maintains its score. 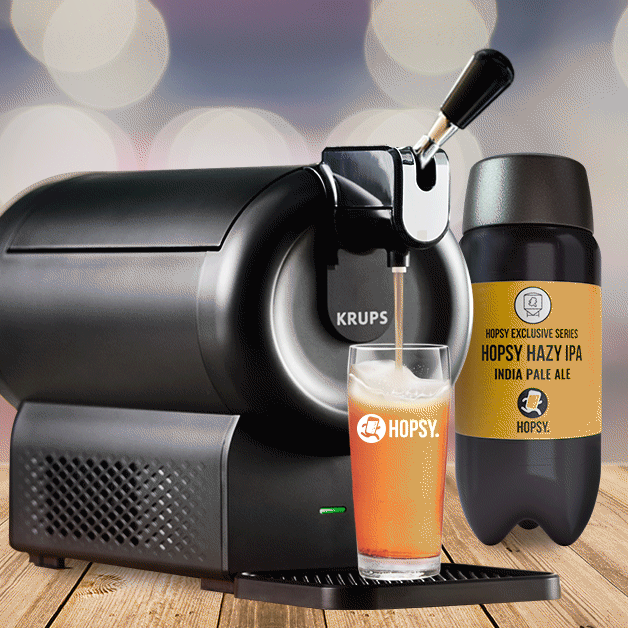