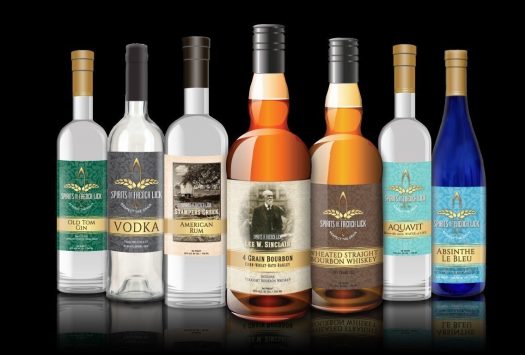 Spirits of French Lick can be found in West Baden Springs, Indiana, which is right next door to the town of French Lick. The distillery is a spinoff of French Lick Winery, and, after nearly 3 years of operation, it now claims nearly a dozen products spanning a range of spirits of styles. (It’s hard to get an exact number, as SoFL’s website isn’t terribly up to date).

Today we look at five products from Spirits of French Lick, including two bourbon whiskeys, an absinthe, an old tom gin, and — why not — an aquavit.

Spirits of French Lick Lee W. Sinclair 4 Grain Bourbon – This bourbon, named for an Indiana entrepreneur, carries a unique mashbill of four grains: 60% corn, 17% wheat, 13% oats, and 10% caramel malt. It’s double pot distilled and aged in full-size barrels with a light #2 char (with no age statement). Really interesting stuff. The nose is quite youthful and unsurprising, with notes of green wood, barrel char, and a bold clove character — all quite earthy but warming and spicy. The palate opens up the throttle entirely, with engaging notes of bold chocolate becoming rather strong after some time in glass. Notes of cinnamon-spiced oatmeal, graham crackers, and banana pudding emerge later in the game. The finish is a reprise of chocolate notes, more milk chocolate than dark, with some barrel char and clove lingering. Surprisingly complex, push past the rustic nose and you’ll find a very charming spirit underneath. 90 proof. A- / $45

Spirits of French Lick The Wheater Bourbon – This is a blend composed of “at least 60%” French Lick’s own 2 year old wheated bourbon, the remainder composed of 7 year old wheated bourbon from Wyoming. Interesting combination, but the results are lackluster. The nose is toasty with wood but quite green, almost weedy and hemp-like at times. The palate is warming but unremarkable, with lots of raw grain and tobacco leaf notes, with a little butterscotch softening things up. The finish is surprisingly short, focused again on lingering cereal notes. 90 proof. B- / $45

Spirits of French Lick Old Tom Gin – There’s no canonical definition of Old Tom gin, but it’s generally a sweeter, often malty style of the more traditional gin you know well. French Lick’s Old Tom doesn’t resemble that description in the slightest, coming across mainly like a spin on London Dry. Though it’s made from a 100% oat whiskey base, the nose is all juniper, with a bit of earth and some Eastern spices backing it up. The palate is again boldly earthy, rustic with notes of bitter tree bark and licorice, dried herbs, and a hefty, almost hoary, juniper push. The finish is somewhat creamy but still heavy with those earth tones which are just unshakable here. 90 proof. B / $32

Spirits of French Lick Aquavit – French Lick flavors its aquavit with 10 botanicals, heavy on caraway, coriander, juniper, and dill. All of the above come through on the nose, though it’s on the mild side — which is probably just fine for most drinkers who don’t want a caraway bomb in their nose. French Lick’s version offers a nose of rye toast with a side of pickles, but it’s lively and fresh, easily approachable even if you’re not an aquavit devotee. The palate is stronger, particularly on the coriander, which gives the spirit a slight dessert-like character that hints at brown sugar and cinnamon. Brighter citrus notes engage on the enduring, cleansing finish. 92 proof. B+ / $29

Spirits of French Lick Absinthe Le Bleu (2019) – An unusual clear absinthe (the bottle is blue, not the spirit). Some basics from French Lick: “13 botanicals in total give rise to this gorgeous pour.  Distilled in the clandestine fashion of the Swiss during the prohibition of absinthe period we avoid all post distillation infusions and instead rely on the trinity of Wormwood, Anise, and Fennel to provide a base upon which we build up pastoral, citrus, and notes of Chamomile.” Poured neat, the licorice notes pop brightly, though an undercurrent of lemon and dill are detectable on the nose. The palate is approachable at full proof, slightly sweet, full of anise notes, and cut with a smattering of dried, savory herbs. Served with sugar and water, it just barely louches, and the water really brings out the spirit’s chamomile tea notes. It also makes for a very mild version of absinthe, with a sweet, lightly anise-infused, and rather uncomplicated conclusion. A great starter absinthe, though pros will find it too basic. 120 proof. B+ / $38 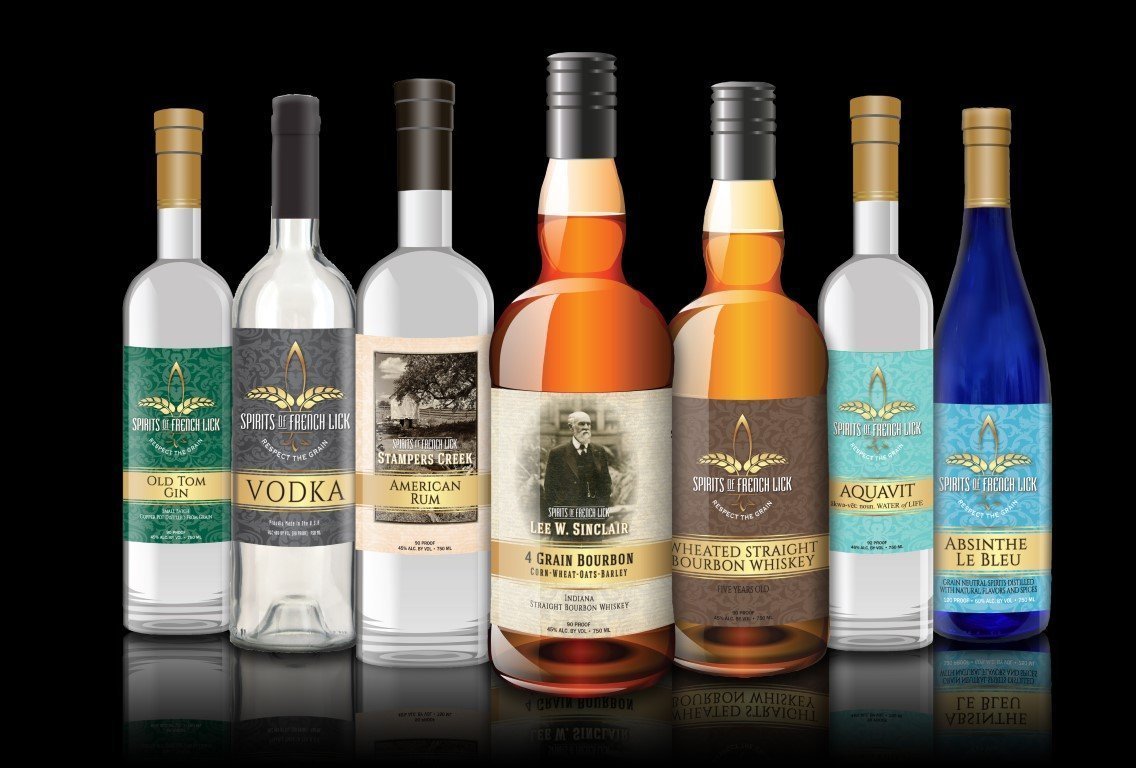