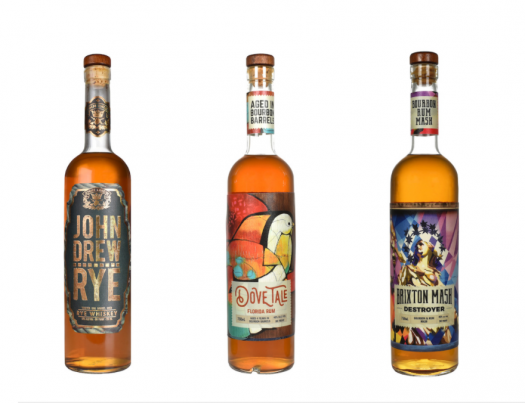 In 2016, John Drew, cofounder of the well-known cigar giant Drew Estate Cigar Company, jumped into the spirits world with the launch of his own spirits collection, gathered under the John Drew Brand label. After 20 years in Nicaragua overseeing cigar manufacturing, he relocated to Miami and began distilling rum and sourcing whiskey from various producers for the venture. We recently received samples of the entire line-up. Thoughts follow.

Brixton Mash Destroyer – This is a wackadoo blend of Florida rum and sourced bourbon of unknown age(s) from multiple Kentucky distillers. The nose is soft but rum heavy with molasses sweetness, cinnamon, and dried oak. On the palate, the spirit has a syrupy mouthfeel and there’s a nice gradual heat. Notes of caramelized raw sugar, baking spice, milk chocolate, and juicy tropical fruits are enjoyable enough, but they never really meld in a coherent way. This is clearly a blend of rum and bourbon, which may go great with a cigar, but on its own it seems a bit all over the place. The first in a series of blends under the Brixton Mash Destroyer label. 90 proof. B / $40 [BUY IT NOW FROM DRIZLY]

John Drew Rye – This rye was sourced from an undisclosed distillery in Alberta, Canada. It was purchased at four years old and aged for an additional three years at an unknown location. The nose on this whiskey admittedly makes for a tough start. There’s a welcome vanilla ice cream quality to it, but a host of greener notes — buttery ethanol, porridge, and sharp menthol — make the overall experience a little difficult. On the palate, there’s modest redemption in the form of chewy caramel, pepper, and subtler bubblegum notes, but it drinks hot for its proof as the ethanol returns on its relatively short finish. 90 proof. B- / $50 [BUY IT NOW FROM DRIZLY]

Dove Tale Rum – The only spirit of the line-up actually distilled by John Drew Brands, this rum is made from Florida sugarcane and blackstrap molasses and aged in ex-bourbon barrels for two years. On the nose, Dove Tale Rum shows some youth with noticeable ethanol notes, but aromas of dark sugar, dried coconut, and vanilla bean keep things enjoyable. The palate is buttery and delicate and not overly sweet with notes of juicy pineapple and crème brûlée. There’s good balance between the base spirit and its barrel influence, which imparts cinnamon, a bit of toffee, and dusty oak notes on the finish. 80 proof. A- / $35 [BUY IT NOW FROM DRIZLY]