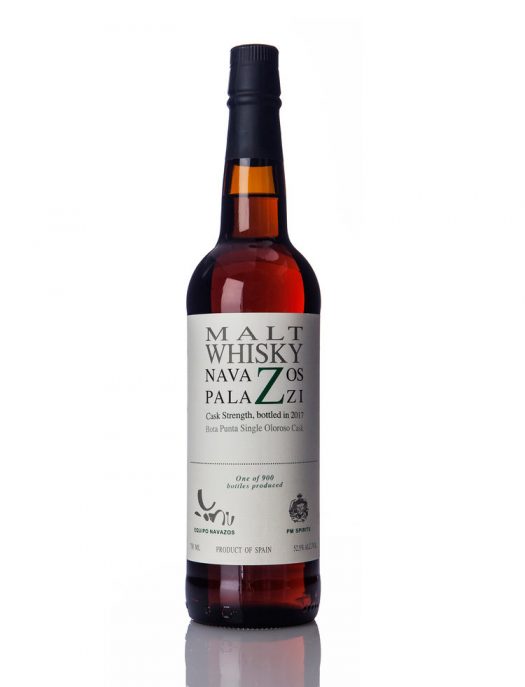 It may surprise you to know that a handful of Spanish distilleries have been making whisky since the 1960s. Not much of that whisky makes it to our side of the pond, but some of it is available from Navazos-Palazzi, a joint venture between merchant bottler Nicolas Palazzi and the famed sherry brand Equipo Navazos. According to the brand’s website, the goal of this collaboration has been to “explore entirely new spirits frontiers” and “break new ground with each debut.” That’s a bold undertaking and one I was excited to evaluate for myself when I received samples of their “Bota Punta” Spanish Malt Whisky and Overseas Malt Whisky.

Navazos-Palazzi “Bota Punta” Spanish Malt Whisky – This whisky derives its name from the particular location of the first-fill Oloroso sherry cask in which it is rested, which sits on the bottom row of barrels in the warehouse and serves as the sampling cask. It’s a ten year old bottling, distilled in Spain from Spanish malt. The sherry influence is immediately noticeable on the nose as dried fruits and subtle pecan, but it’s not so big that it overpowers the malt which comes across buttery and slightly herbal. On the palate, it’s exceedingly approachable even at a bit over 100 proof. That buttery, nutty quality emerges even more, along with notes of juicy dates, allspice, clove, and leather. It’s a rich and flavorful whisky that develops on the palate for quite a while before dissolving into a subtle, sherry sweetness on the finish. 105 proof. A- / $90

Navazos-Palazzi Overseas Malt Whisky – This whisky is a blended malt sourced from an undisclosed distillery in Airdrie, Scotland. No exact age is given, but it’s reportedly around seven years old with four of those being spent in first-fill Olorosso Sherry casks. On the nose, this whisky is honeyed and bready with a slightly astringent wine element. The palate is restrained with notes of heather and vanilla custard that are just slightly out of balance with the cinnamon and raisin sweetness from the sherry cask. It’s a good blend but one that could probably have used a little more time in the barrel. This single cask (Cask #12) is the first of eight annual single cask releases. 105 proof. B / $90