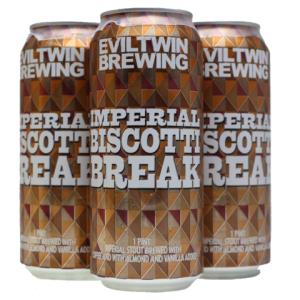 Brooklyn’s Evil Twin have been releasing interesting beers with obligatory humorous titles (“Ryan and The Gosling,” “Cognac Barrel Aged Jesus”) for a bit, and today we’re going to sample two of their Imperial Biscotti beers — aged brews that were sourced from Westbrook Brewing Company down in South Carolina.

Evil Twin Imperial Biscotti Break – Lots of almond and vanilla on the nose, it’s almost medicinal at first but mellows after sitting in the glass for a minute or two. Unlike some imperials, the coffee notes do not dominate the taste – which is balanced by a healthy dose of chocolate, banana, and (yes) biscotti. The 11.5% abv is masked by roasted malts and vanilla bean at the finish, with some chocolate chip cookie and caramel lingering about after a bit. Beautiful stuff. 11.5% abv. B+ / $15 (per four-pack of 16.9 oz. cans)

Evil Twin Imperial Biscotti Chili Hazelnut Break – This has everything about the original but offers even more to love. The coffee and cocoa still run rampant on the nose, but the chili and hazelnut provide an amazing whiplash of heat and sweetness, with a little bit of graham cracker and the biscotti if it was dipped in brown sugar. Very well balanced and immensely enjoyable. Get this one while you can. 11.5% abv. A- / $15 (per four-pack of 16.9 oz. cans) 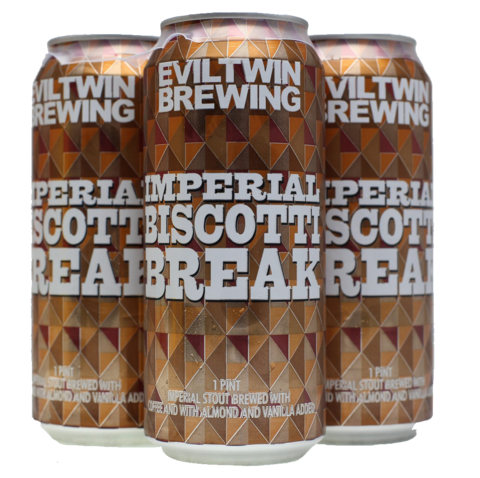