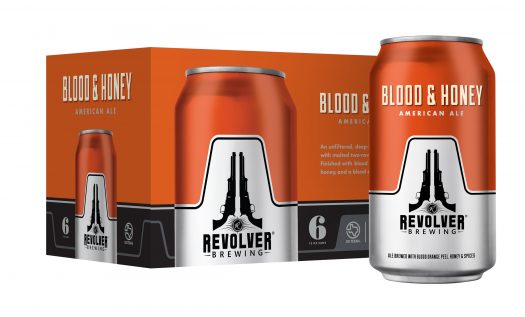 MillerCoors-owned Revolver Brewing finds its home in Granbury, Texas, where it produces a small but growing collection of beer in several styles — all distinctly Texanized. Four beers in total are available in year-round release, with a fifth on the way (plus a variety of limited-edition offerings). Today we look at the core quartet, which are being made available in cans for the first time. (All reviews below are from the newly canned version of the beer.)

Revolver Brewing Long-Range Pils German-Style Pilsner – A bolder rendition of pilsner, this is a nutty, bready, pretzel-friendly brew paired well with just a slight squeeze of lemon. Refreshing and clean, the beer doesn’t exude complexity, but it’s a shining example of a style that doesn’t really need it, anyway. 4.8% abv. A-

Revolver Brewing Blood & Honey American Ale – “An unfiltered, deep-golden ale brewed with malted two-row barley and wheat. Finished with blood orange peel, Texas honey and a blend of spices.” That’s a lot going on, but it’s the wheat and orange that make the most impact here, giving it a bit of a hefeweizen character (particularly since it’s unfiltered). The honey provides a lift, tempering the grainy character with some needed sweetness. 7% abv. B

Revolver Brewing Sidewinder Southwest Pale Ale – Brewed with agave nectar, citrus, maize, spice and finished with Citra hops, this is decidedly southwest from top to bottom. The results are interesting, the citrus and agave giving it a boldly lemony, herb-heavy character up front, though the relatively thin body isn’t overly memorable. The spicy, slightly vegetal finish does remind one of tequila — which is either a good or a bad thing depending on what kind of night it is. 6% abv. B

Revolver Brewing Full-Tang IPA Tangerine IPA – Brewed with tangerine peel and Saphir, Mandarina, Apollo, and Citra hops. Oddly, it’s a little thin, despite a heavy-duty alcohol level, and on the burly side of the IPA fence, showing a dustier, grainier side of things. The beer becomes fairly resinous as it opens up in the glass, with a Belgian-inspired fruitiness (albeit not particularly tangerine-inflected) on the finish. 7.2% abv. B