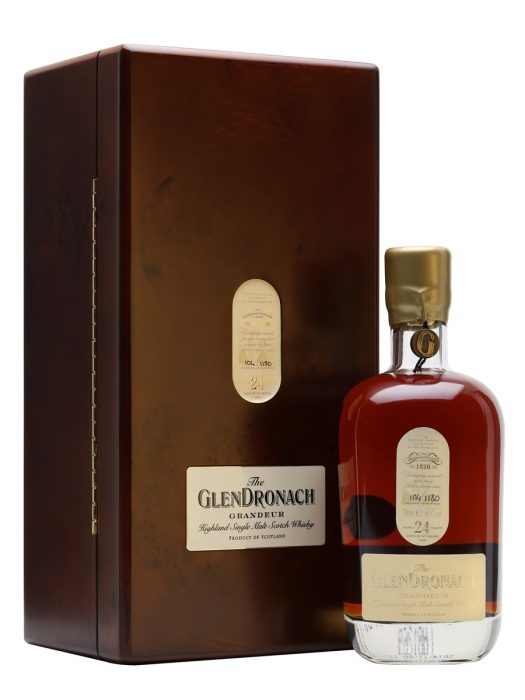 Whoa, here’s a trilogy of new releases from The Glendronach — a Highland distillery (in the far north of the country) known for its sherry cask maturation — none younger than 24 years of age.

These are all very rare releases — though the two single casks releases are U.S. exclusives. Let’s give them a try.

GlenDronach Grandeur Batch 9 24 Years Old – Blended from oloroso casks, none younger than 24 years old. Do you like sherry? Grandeur has loads of it, its nose heady with notes of candied nuts, orange peel, and an intense, oily furniture polish character. On the palate, the silky (but, again, oily) whisky charms with sandalwood notes, loads of nuts, Christmas spice, and a hint of meaty bacon. The finish sees a touch of eucalyptus folded in, its sweetness restrained to allow a more savory element linger. An excellent choice for the final days of cold weather. 97.4 proof. B+ / $750

GlenDronach Single Cask #415 24 Years Old – As the name suggests, this is a single cask release that’s spent 24 years in barrel. The nose is less expressive than the Grandeur release, keeping its notes of fruit and nuts closer to the vest, buried under a rather harsher furniture polish note. Things spin ’round on the palate, though, where a sharp citrus character awaits, melding beautifully with an almond-heavy fruitcake character that leads to an austere, old-wine finish. 103.6 proof.  B+ / $675

GlenDronach Single Cask #2257 27 Years Old – Three extra years make a difference. Those intensely nutty sherry notes take divergent paths here: Sultry earthy notes, with aspects of toasty wood and roasted coffee beans on the nose, and then a stronger fruit profile, starting with a sharp orange peel aroma that becomes even more impressive on the palate. That old sherry nuttiness makes a reprise on the finish, considerably oily and showcasing a bit of bacon, well-aged barrel wood, and licorice. The finish is the essence of pure sherry, deep and rich with flamed orange oil and walnut toffee notes. 105.8 proof. A- / $1100 [BUY IT NOW FROM DRIZLY]