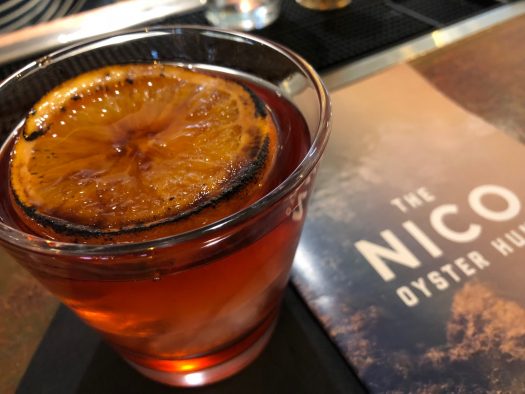 The upscale bedroom community of Mount Pleasant is just a few minutes and a big bridge away from Charleston, South Carolina, and a decade ago no one would have thought to put a high-end French bistro in these parts. Things have changed, though, as Mt. Pleasant has continued to vault its way upmarket. 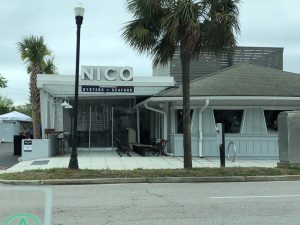 NICO, which opened here five months ago, isn’t just a restaurant and bar, it’s also a man: Nico Romo, who is one of the world’s youngest French Master Chefs. The man clearly has a passion for seafood, and his and general manager Cal Goodell have even extended that to the drinks menu with the Scotch Oyster.

Put simply, the Scotch Oyster is a raw oyster with a small shot of Scotch served on the side. You drink the brine, pour a little whisky on the bivalve, gobble the combination up, then pour the rest of the Scotch into the shell to finish it off. NICO used to use Bowmore in the menu item, but at $12 it was a little ritzy. At $6 with a shot of blended whisky John Barr, it’s something you can probably have by the tray instead of just a single. The combination works well, too: I’ve had the oyster-whisky mix in the past, and I think it works better with a milder blend than with a stout Islay spirit. This one’s a great little combo. 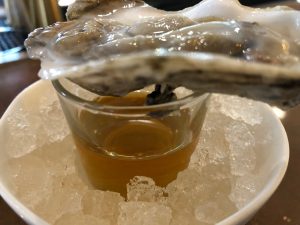 NICO’s cocktail menu is heavy on the classics, though most have a bit of a Charleston spin to them. The French Martini takes Dixie vodka and mixes in house-made creme de cassis and pineapple juice to make for a fruit-heavy crowd pleaser. Also quite summery is the Absinthe Swizzle, which is not made with absinthe but rather Absentroux, an anise-flavored vermouth-like wine, plus Green Chartreuse, lemon and lime, Angostura bitters, and house-made ginger beer. Refreshing and fun, it’s served on a mountain of crushed ice — but I’d have loved to see it with even more Chartreuse… and served with a straw to help keep the ice off my face.

My favorite cocktail of the evening was the least “spun” of them all, the Coleman Boulevardier, which is made with Rittenhouse Rye, Campari, and Dolin Rouge vermouth. The garnish is a cool-looking wood-fired orange that adds a bit of creme brulee character to the mix, though not so much to really change the structure of the drink. All told, it’s a solid conclusion to a nice roundup of beverages — and next time I’m going for a plate of fresh, raw oysters to pair with it all!